uenos Aires is a city that needs an exclamation point after its name.  And maybe all caps.  BUENOS AIRES! seems to capture the city’s exuberant, exhausting, and beautiful urban buzz.

After a long and “bumpy” flight (envision a gravel road with loads of potholes), we arrived in Buenos Aires (BA) by 10:30 local time.  We cleared customs in a timely manner and all of our bags (phewph!) were waiting for us on the luggage carousel.   We exited the arrivals hall and there was a very large crowd of drivers with name signs.  After approximately 5 minutes (not bad in the grande scheme of things), we located our sign!  although it was not our specific driver, he guided us to the pick up area where our driver was waiting.  This service was all pre-arranged via the Savoy Hotel and it was very clear and concise (aka no fuss, no muss) and we were soon on our way to BA Central.

We were greeted by the Savoy staff with genuine smiles and warm welcomes.   The receptionist was quite helpful and while we were signing in, a bell boy had gathered all of our luggage to be delivered to our room.  After a very long flight and a little weary from the turbulent ride – we were happy not to have to haul the bags to our room.

Speaking of the room!  we had initially booked an Executive Room at the Savoy,  but I then had decided to “surprise” Anthony with a Christmas Gift “upgrade” to one of the four “Corner Suites” that the Savoy offers.   I will let the photos express themselves, rather than try to explain the sheer beauty of the room. 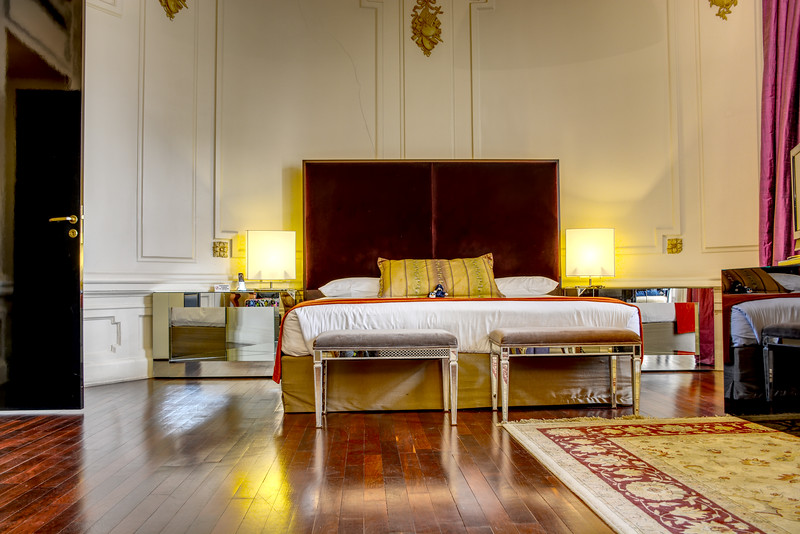 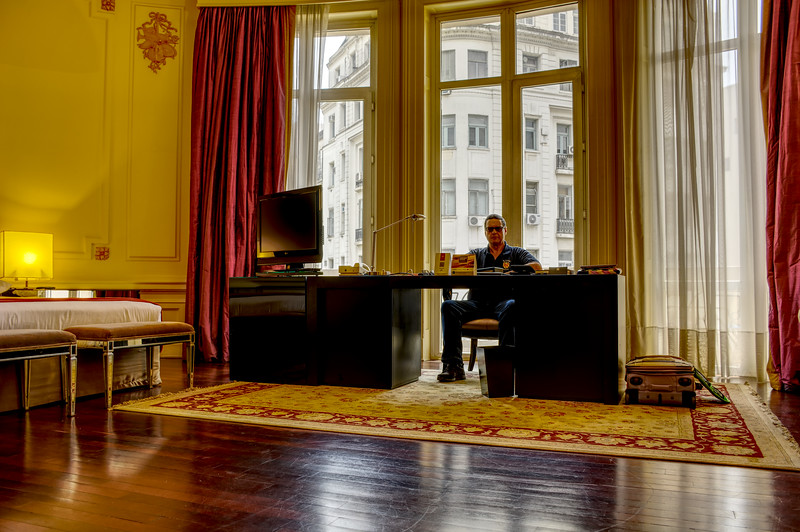 Yes, the Savoy is an older hotel (built in 1910) and is showing a bit of her age, but we are very happy with the selection and are pleased we decided to book this fine hotel.  She sports a neo-baroque style, by Architect G. Agostini and is located in the heart of the city, quite close to Corrientes Avenue which is populated with theaters, cafes, and bookstores.  The hotel is also in close walking distance to the barrios of “La Recoleta” and also a short walking distance to the Obelisk, the central monument of Buenos Aires.

Our pre-cruise intentions included a 3PM free walking tour that started at the Congress Buildings, a mere 500m away from our hotel.   But, alas!  all great plans can go south and we ran behind in time from settling in and getting our items in order.  Instead of the free walking tour, we built one of our own – at a more leisurely pace and picked two places where I had wanted to go that are usually not part of any guided tour.

Our first destination was the El Ateneo Grand Splendid Bookstore in the Recoleta neighbourhood.   It took us approximately 15 minutes to walk from the Savoy to Recoleta and a moderate pace.   It was a very easy walk – straight up the street until Sante Fe Avenue and then a turn to the left and within 100 metres, we had arrived.   I have seen many photos of El Ateneo on the internet, but none really do this magnificent place justice. We were both simply awestruck by the sheer beauty of this old opera house that had been converted into a bookstore and is apparently, considered the most beautiful bookstore in the world.  I would have to agree! 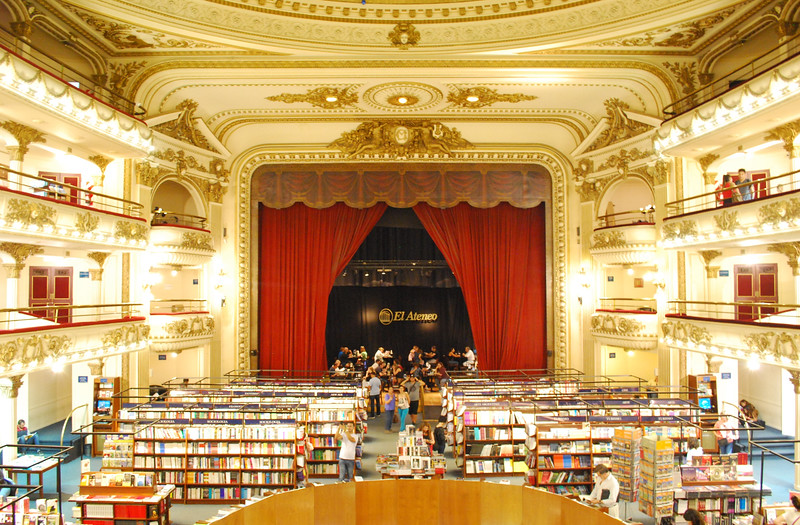 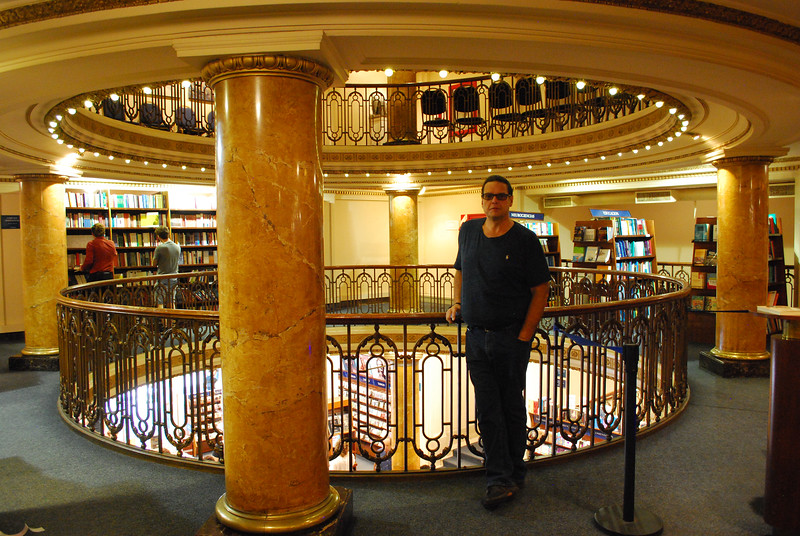 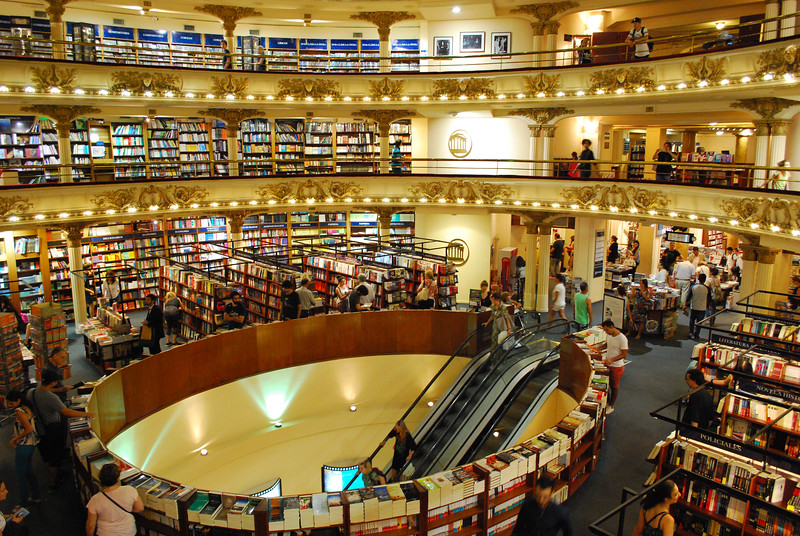 After being amazed with El Ateneo, we decided we wanted to have a small lunch and hot drink.  We were tempted by the Cafe offerings of El Ateneo, but I had a different place in mind.   BuenosTours had recommended a visit to Cafe El Gato Negro and their blog post had me intrigued.   We reluctantly left the marvelous bookstore and headed back in the direction towards the bustling Avenida Corrientes.

Before we knew it, we had arrived (much faster going back towards the Savoy, it seemed!).  Cafe El Gato Negro can be seen from a fair distance with its scarlet red canopy draping the Avenida, as it invited passerbys to enter through their doors.

The cafe itself was established in 1929 and was originally a spice store.  We were greeted by a kind door man who opened the doors for us and we were instantly overcome by scents of coffee, teas, and spices.  And the atmosphere?  wow!  it just took us over with original wooden furniture that has been carefully preserved.  In fact, due its historic preservation since 1929, El Gato Negro is considered a historic cafe, or “cafe notable” within Buenos Aires.

We picked a lovely table for two near the back of the cafe and were immediately greeted by a friendly waitress.   We ordered “chocolate y dulche de leche” tea and two vegetarian sandwiches.   Both were of excellent quality.   The prices are a little heftier than your average BA cafe, but we felt the quality of the tea and sandwiches, with the amazing ambience with the historical cafe itself, was well worth the cheque.

After our delightful afternoon that satisfied two of our guilty pleasures (books and cafes) – we returned to the Savoy Hotel.   After a tiring day of travel, we decided to simply grab a pizza and empanadas from the “La Continental” pizza chain that was located right across the way from the hotel.

Please note that we felt safe at all times while touring on our own within the big city.  We had several “warnings” of the great “crime” level within Buenos Aires.   We were fine!  We dressed down (nothing fancy), we did not wear any jewellery, and we did not expose any expensive smart phones or cameras during our travels.    Buenos Aires *does* have pick-pocket scams and one needs to be attentive, but if you travel smartly and are savvy about your surroundings – then ENJOY this amazing city.  There is a lot to be offered and don’t be scared to miss out on it.   Travel wise and if you have any hesitation – hire a guide!   This was our only solo day in Buenos Aires and from this point forward, until sail-away – we had a guide with us at all times, which led to an even further comfort level in the bustling (14,000,000 ppl) metropolis of Buenos Aires.  Although the golden age of Buenos Aires has since passed, it is a historical city with secret gems awaiting your discovery!

December 22, 2017
Birding SOUTHERN ENTRE RÍOS
Our guide, Marcelo Galvensky, picked us up at the crack of dawn from our hotel in Buenos Aires.   We were on a long day trip adventure to the southern region of Entres Rios province of Argentina which is a “hot spot” for birds because of its unique ecosystems (three in total) that is home to  certain specialties that are rare or not possible to find in the BA proximities.

Marcelo was a brilliant guide and we had a terrific day.   He also prepared for us a vegetarian picnic lunch (which we had in the middle of the Savannah!) and he had delicious snacks and plenty of water for us in the blazing heat (35C +++) throughout the day.

We returned to Buenos Aires in the dark (we were gone for over 12 hours) and we appreciated each and every moment of Marcelo’s time.   He is not only a great birder, but super fun guide, and very attuned to his guest’s needs.

We would most definitely recommend Marcelo for any birding trips that he offers.

We had planned to do the free walking tour that we offered at 10 AM (Recoleta area), but ultimately at the last minute decided to contacted BuenosTours (of which we had 2 tours booked through them) to see if there was any chance of securing a guide for the Cemetery.   We were in luck!   Richard (our guide for Sunday) had become available, so we arranged a semi-private tour (us and one other couple) for a last minute jaunt in Buenos Aires prior to embarkation.   BuenosTours also arranged for a special private transfer at the end of the tour, whereby the van would pick us up from our end point, take us back to our hotel and wait for us as we retrieved our luggage, and then finally transport us to the cruise ship terminal.  Excellent service – all the way around!

OK – now how did the day start?   Our driver promptly picked us up for 09:00 am and dropped us off in Recoleta district to meet our guide, Richard.  Richard was there patiently waiting for us and our great morning tour began!

We first visited a “Cafe Notable” (Historical Cafe), La Biela.   This cafe is over 100 years old and has hosted some of the most historic figures in Argentinian history, including Jorge Luis Borges and Adolfo Bioy Casares (literary figures).

From La Biela we observed in front of Plaza Francia, a *monstrous* rubber tree that was planted by the Recoleta brothers in 1800.  It is at least 20 metres high and 50 metres wide, with several support structures in place, offering a great deal of shade from the summer heat of Buenos Aires.   In one section there is a bronze statue of a man with the weight of one of the branches resting upon his shoulders.

Continuing on we had a lovely view from the Plaza Francia of Basilica de Nuestra Señora Del Pilar, an Argentine chapel that was built in the 1700s.  We did not go inside the chapel, as we were en route to the cemetery, but it was a lovely view, never the less!

After a short walk from La Biela Cafe, the rubber tree, and past the Chapel – we arrived at the famous Recoleta Cemetery.

We were immediately greeted by the grandeur (and surreal eerieness) of the Cemetery upon entering through the gates. 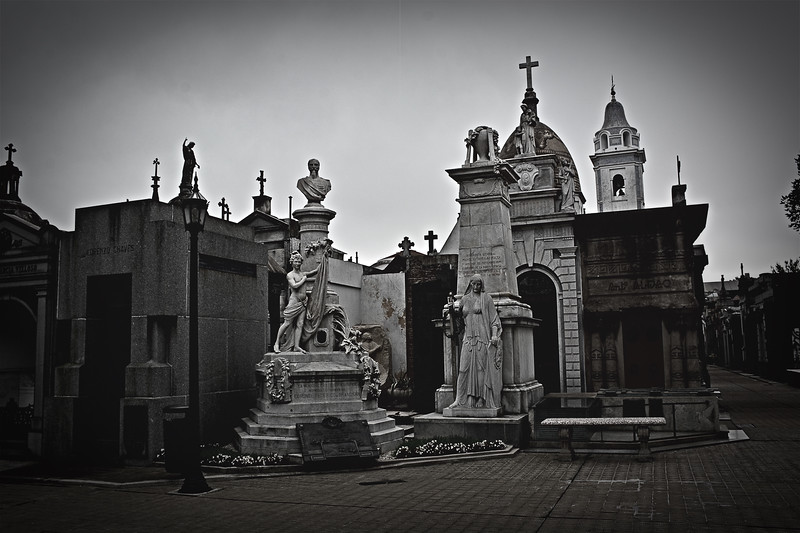 The Recoleta cemetery was reserved for the Upper Class citizens of Buenos Aires.  A few exceptions existed, but not many.  Some crypts/mausoleums were ordinary, many were ornate, several monuments were seen.   It was a very interesting experience and I believe no visit to Buenos Aires would be complete without a tour of this area of historical significance.

An unique opportunity was presented during our tour, whereby we were able to obtain a bird’s-eye view of the cemetery (what happens in Recoleta, stays in Recoleta!). 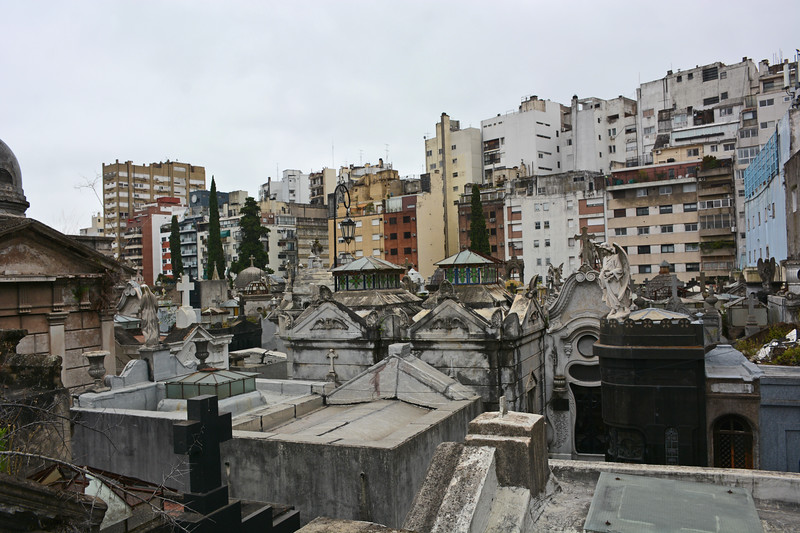 After a great intro with very interesting historical stories, our guide Richard led us to the most famous crypt within the cemetery – that of Eva (Evita) Peron.   Surprisingly, there were very few people within the cemetery today – possibly because it was Christmas Eve weekend – but it was really great for us!   no line up and fantastic views of Eva’s resting place.

Here is a short video montage of our adventure within the Recoleta Cemetery – including some commentary about Eva Peron, from our guide Richard:

Please press on the “NEXT” button for more tours within the great city of Buenos Aires (following our embarkation on the Cruise Ship, Celebrity Infinity).