From Celebrity Today:  “The Sounds, New Zealand”
DUSKY SOUND:  9:00 AM – 10:30 AM
Steep cliffs that have been carved over centuries by dozens of waterfalls, surround the largest and most complex of the many fjords along the New Zealand coast, Dusky Sound. Noted as an Important Bird Area (IBA) due to the breeding of the Fiordland Penguins.  Dusky Sound is a wildlife paradise, with seals and dolphins patrolling the water, and birds like broad billed prions, mottled petrels, and sooty shearwaters floating on the overhead thermals.
DOUBTFUL SOUND: 12 NOON – 1:00 PM
Once you breathe the more than natural air and experience the atmosphere’s serenity, you’ll see why Doubtful Sound is inarguably a favoured peaceful destination.  As cold mountain water flows from the cliffs it creates an unusual phenomenon, a dual layered marine ecosystem of fresh and saltwater.  This serves as a playground for a number of species, including fur seals and two types of penguins – the fiordland crested and blue penguin.
MILFORD SOUND:  4:00 PM – 6:00 PM
As we sail into the narrow fjords of Milford Sound, even our massive ship seems to shrink in comparison to the towering cliffs topped by lush mountain terrain.  Situated within Fiordland National Park, this natural wonder is part of the Te Wahipounamu World Heritage Site and is protected by its natural geography, which makes it a haven for all types of wildlife.

Marine Studies Note/Quote from the Department of Conservation (DoC): 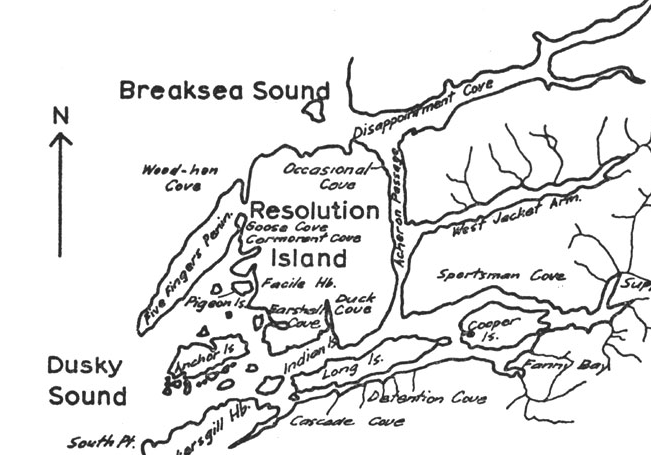 “Dusky Sound is the third great inlet on the west coast of the South Island of New Zealand as one progresses east from Te Waewae Bay. It runs inland for nearly thirty miles and is studded with numerous islands ranging in size from mere rocks to large islands. The mountains rise sheer out of the water and there is dense bush everywhere. At the head of the Sound, Mount Solitary rises 4,770 ft above sea level.” Map & Description Source Link

We began our entry into Dusky Sound at the Southern Point (refer to map above).  We continued along to the left of Resolution Island and admired the beautiful cascading landscape of islands that dotted the Sound.  We continued along up Acheron Passage to Disappointment Cove and then made a left turn to Breaksea Sound where we made our final exit to a stunning and beautiful introduction to Fiordland National Park. 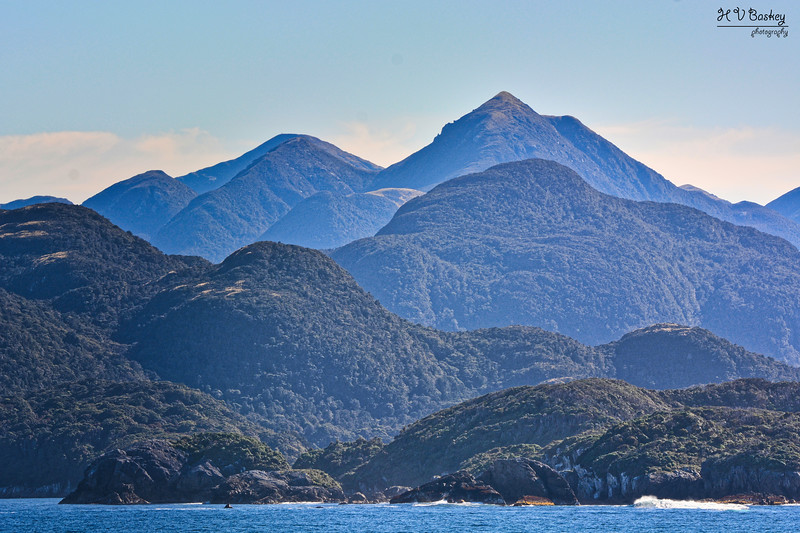 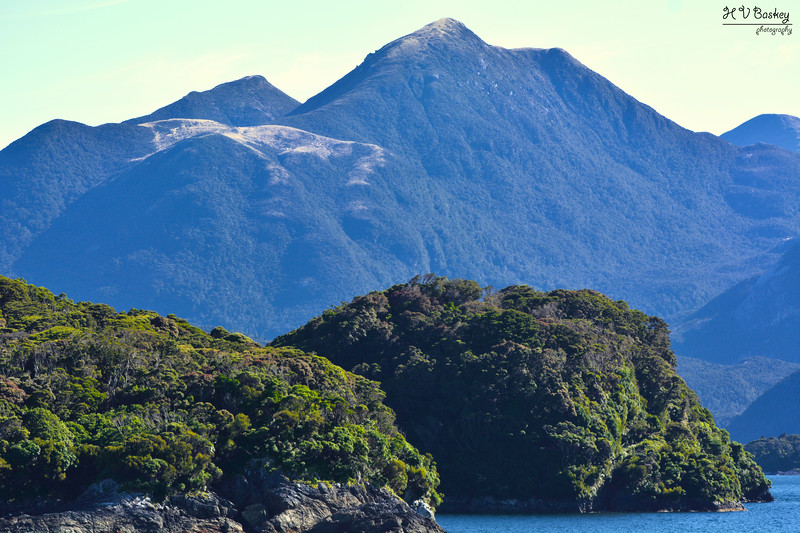 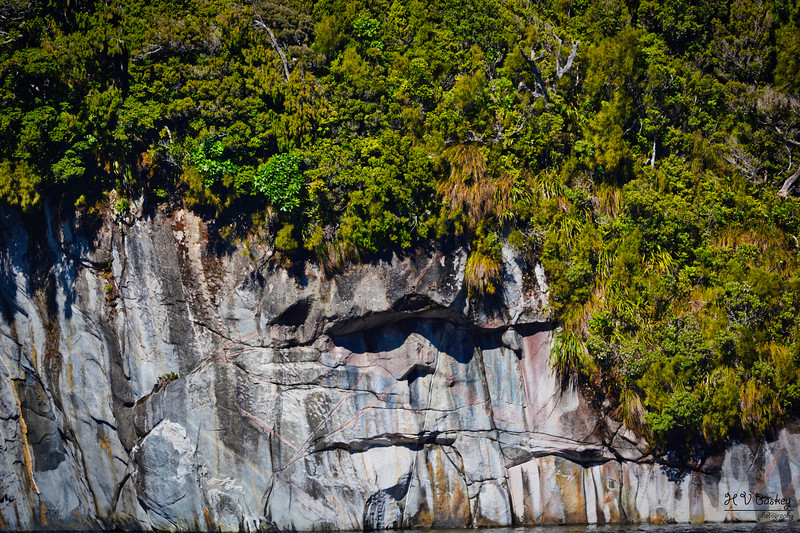 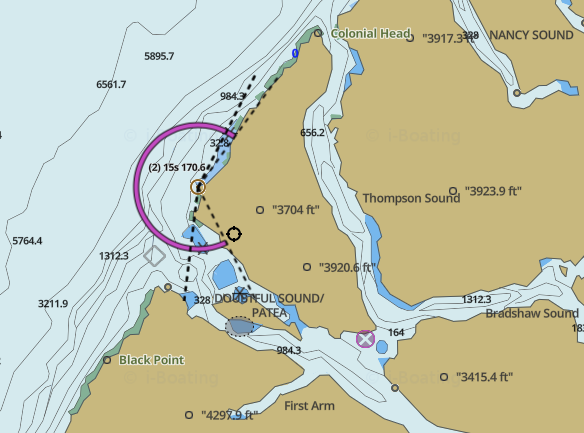 Our next stop with Fiordland National Park was “Doubtful & Thompson Sounds”.  We would enter at the southern side of the third highest island in New Zealand, “Secretary Island” (1196m), and then would cruise through this beautiful fjord, flanked by the cascading mainland until we reached the inner junction of Thompson Sound.  We then made a left turn and ventured north, following Thompson Sound back to the Tasman Sea. 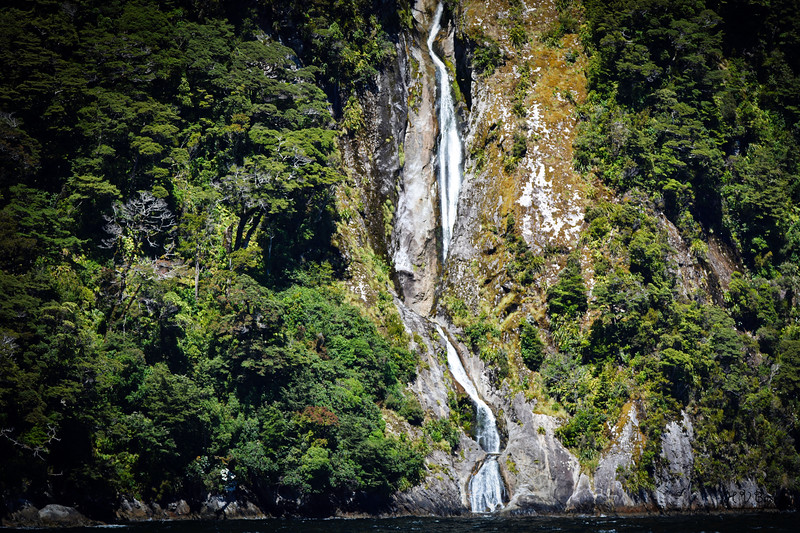 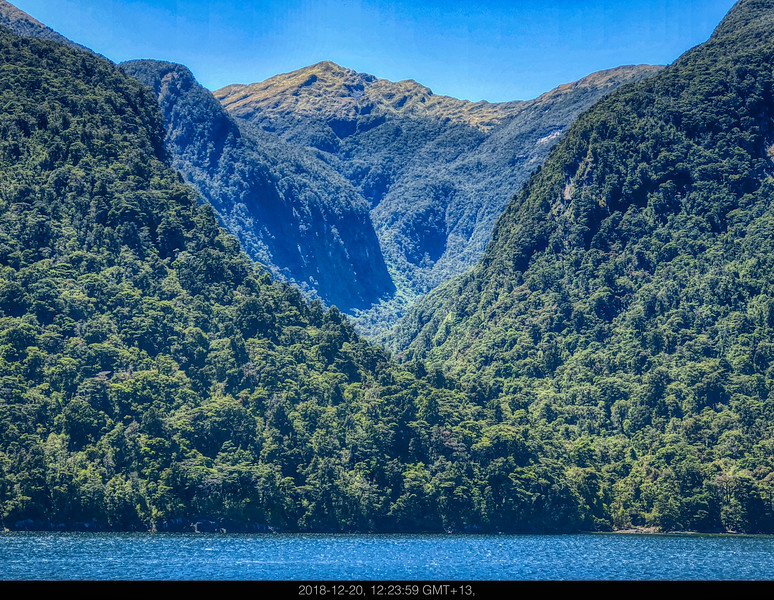 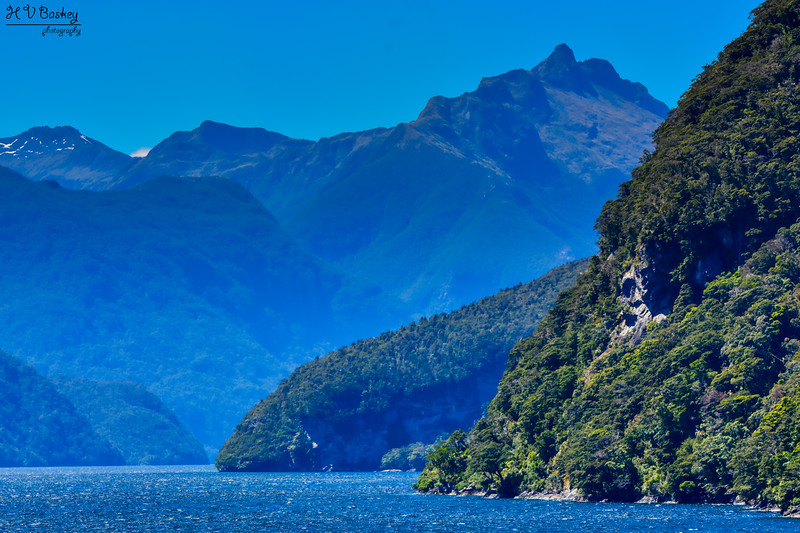 Secretary Island (8140 hectares) is currently undergoing a restoration project. Currently, the only pests on the island are a non-breeding population of deer and a small population of stoats.
“Secretary Island is fulfilling its role as a sanctuary for threatened species, with translocations of mohua, North Island kōkako, South Island robin and rock wren. Native species already present, including Fiordland skink, weka, bellbird and kākā, are also responding positively to the reduction in stoat numbers.”  Source Link

As like in Dusky Sound, we were greeted by the resident bottlenose dolphins!  this time, I was in the proper position to capture their greetings, Kia Ora! 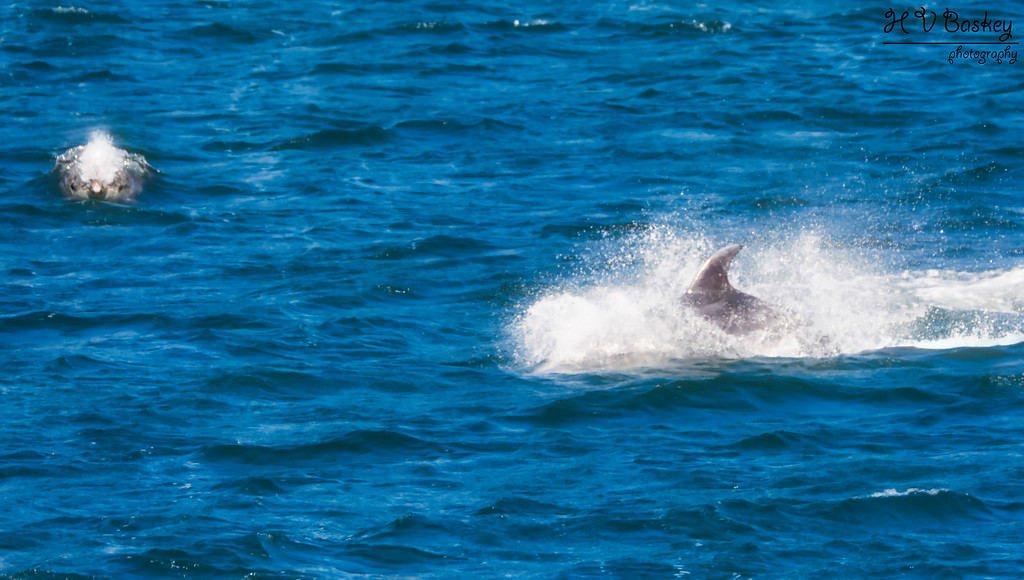 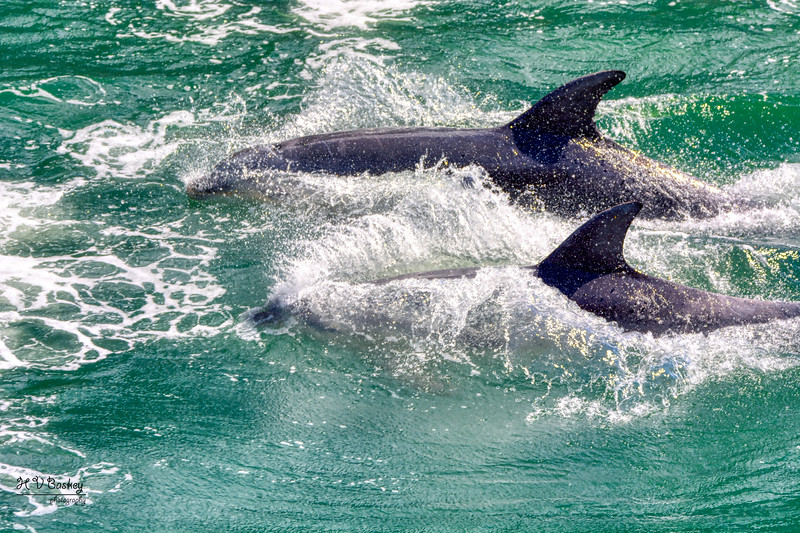 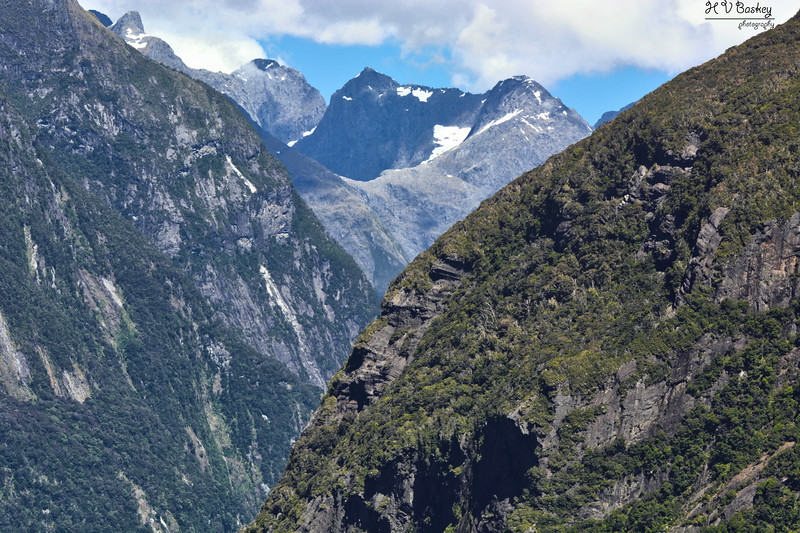 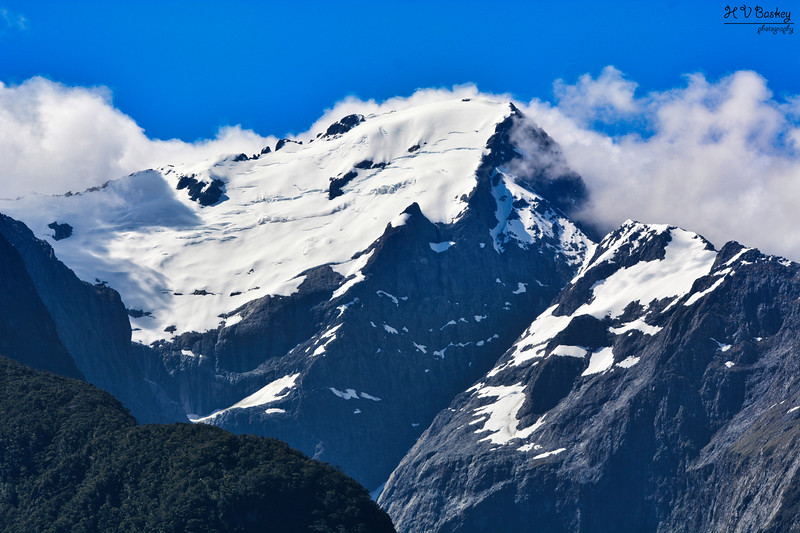 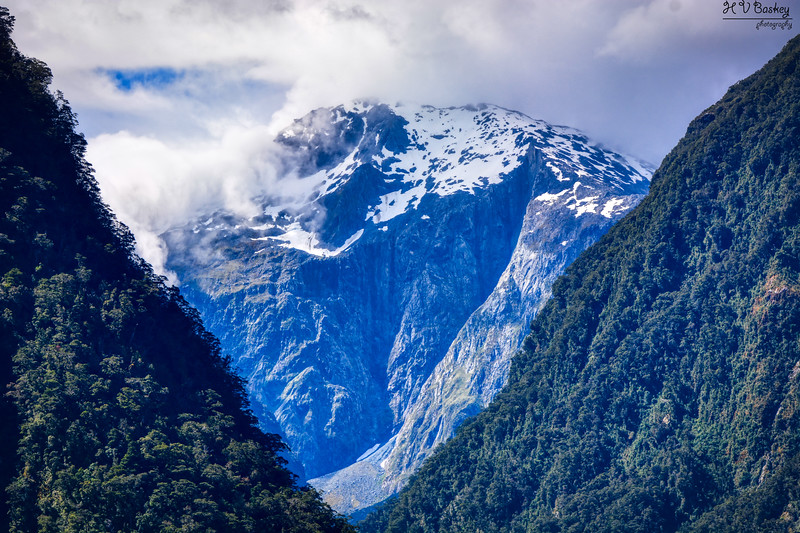 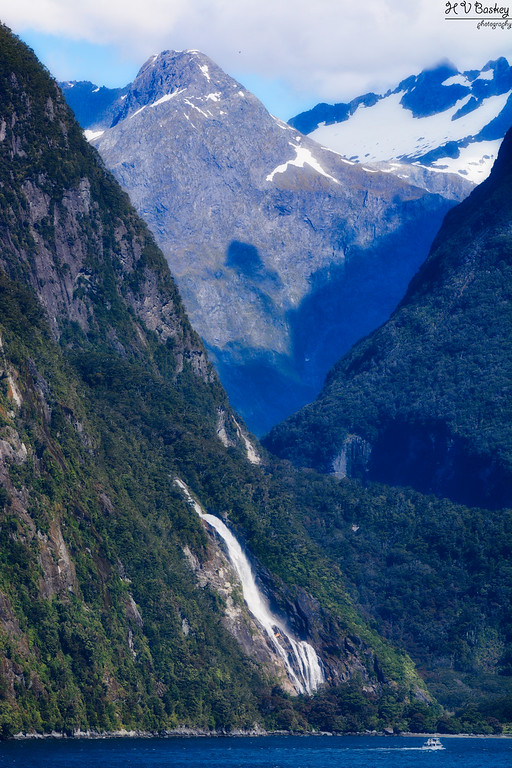 After an amazing day cruising the Sounds of Fiordland, we were off to Sea, where we would spend the next two days, prior to our arrival in Sydney, Australia. 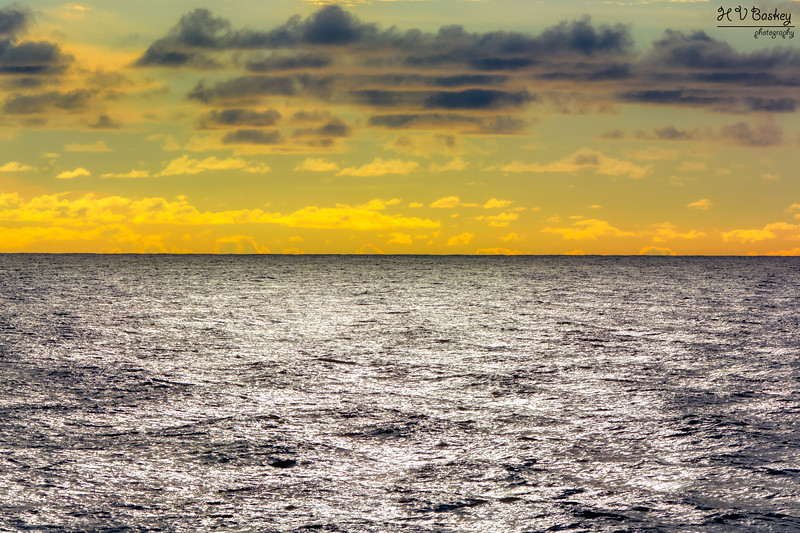