We sailed in at sunrise to the port of Phu My, Vietnam. Another industrial / commercial port in the middle of no where. However! a smaller port than Laem Chabang, Thailand.

We were then off in the opposite direction of most passengers to salt pans, grasslands, mixed forest, and beach environments in search of birds.

We spent a long, full day, birding several different environments. We saw several species that we observed in Singapore, but added quite a few more to our life list.

It was a day well spent and we were happy not to have gone to Ho Chi Minh City (Saigon) as we heard mixed reviews on those who travelled there. A couple that we met did the Celebrity Mekong Delta excursion and they rated it very well. IF we were not birding, that excursion would be one to be considered.

I won’t go into the details of our birding trek, as that will be covered within our “Baskey Birding Blog”.  But suffice to say – it was awesome to get off the beaten track that more tourists visit and be able to experience the varying landscapes in search of birds, from this port of call.

Today, we joined a group of fellow cruisers who we met on Cruise Critic for a tour of Hoi An from the port of Chan May, Vietnam.  It was booked via “Asia Eyes Travel – We Go Halong Bay”.   The tour was entitled “Danang & Hoi An”.  Although we enjoyed Hoi An (because of its beauty) – we would NOT recommend this tour company.   First of all, we were asked to pay for the balance of the tour shortly after we got on the van (we did an initial deposit pre-cruise).  Some of us wondered, if we pay now – will the service go down?  and yes!  it indeed did.   The guide barely spoke throughout the long drive to Hoi An and in a nutshell was not interactive and provided little information throughout the tour.  He then took us to a “friend’s restaurant” for lunch and we would have done much better on our own!  The grand finale was when the van’s driver went to take over another vehicle on the narrow highway and we were seconds (inches) away from a head-on collision.   It was horrible!  I am just thankful we made it back to our ship in one piece …

Now!  aside from saying the above – here is a recap of our day!

Hoi An is yet another industrial/commercial port on the Asian Immersion Cruise.  We were now getting used to these type of ports (ie., in the middle of nowhere with no town close by).   There was a welcoming committee once we disembarked! 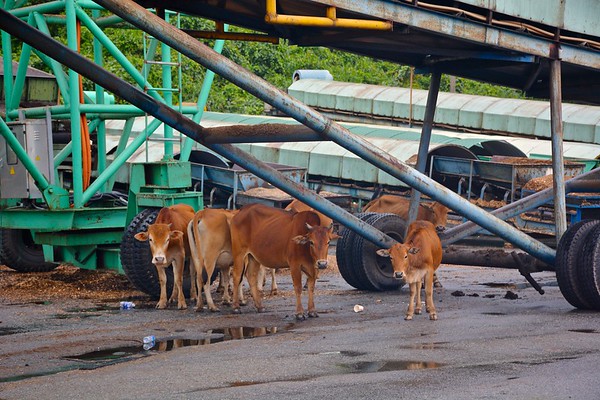 Although an Industrial port, it was quite picturesque!  and we were able to take a few photos prior to boarding the van.

Once we were underway, we climbed up one of the mountains and precariously stopped to take a few photos of the bay below us:

We then continued along to our first destination, “Marble Mountains” – but along the way, it was quite evident the preferred method of travel in Vietnam: 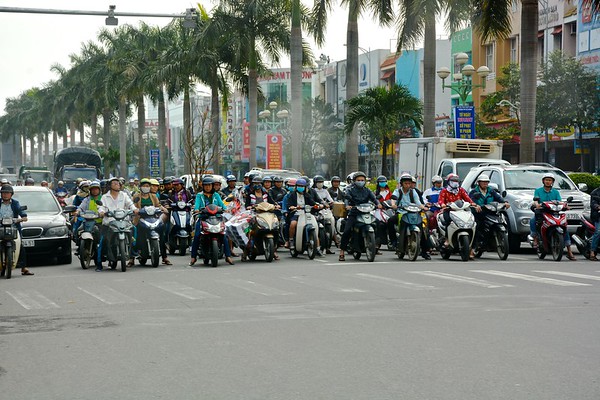 We finally arrived at our first destination, “Marble Mountains” which is located approximately 9 km south of Danang. The cluster of five limestone and marble hills are a well-known pilgrimage site with peaks, caves, tunnels and temples. The hills are named after the elements metal, wood, water, fire and earth.

We took a lift up to the top of “Water Mountain” which offered spectacular views across Non Nuoc. The Mountain of Water features pagodas dating back to the 17th century and a number of caves which contained interesting shrines and sculptures.

Although, our guide gave us tickets UP the mountain, he instructed us to take the stairs down (OR buy tickets for the elevator out of our own pocket). Hmmmm. We chose to take the stairs. Thankfully, we were mobile enough to do so!

After our “rushed” tour (our guide just wanted to whip us through) – the guide took us to the marble shop where there were some pushy sales people. We now know why the guide was rushing us through Marble Mountains. The shop featured lovely marble and jade offerings, but obviously overpriced with a kick back to our guide.

From the marble shop, we then continued on to our featured destination, “Hoi An” – a picturesque village that dates back thousands of years and is quite preserved, although several attractions are notoriously overpriced (as compared to other Vietnamese sites).

The most famous attraction and the symbol of Hoi An (featured on Vietnamese currency) is the Japanese Covered Bridge’s Pagoda (Chua Cau or Lai Vien Kieu) that was constructed in the early 1600s.

We also visited a museum during the “short” tour that the guide provided that featured a shrine and lovely sculptures:

We also paid a visit to “Tan Ky National Heritage House”.  The old house is approximately a couple of centuries old and reflects the combination of both Japanese and Chinese architecture.  There are four small rooms within the house bestowed with lovely antiques.

Our guide then took us to a Fine Arts Handicraft workshop where silk manufacturing was explained to us.  The main level had several Vietnamese women handcrafting silk tapestries, while on the upper level was a clothing shop for the discerning buyer.

Following our short tour with the guide, we were taken to an obvious “kick back” restaurant for lunch. We asked about vegetarian options and we were assured by our guide that this was the place to eat! We were served a plate of rice with frozen vegetables heated up (siiigh).

Photo of the restaurant with our guide, smugly sitting outside enjoying likely one of the easiest tours he has ever given – LOL!

After lunch we were given “free time” (or siesta time for our guide) where by we walked the streets of Hoi An on our own. Now, we were beginning to enjoy ourselves!!! We found an old street market outside the more “touristic” area and simply strolled enjoying the real streets of Vietnam. 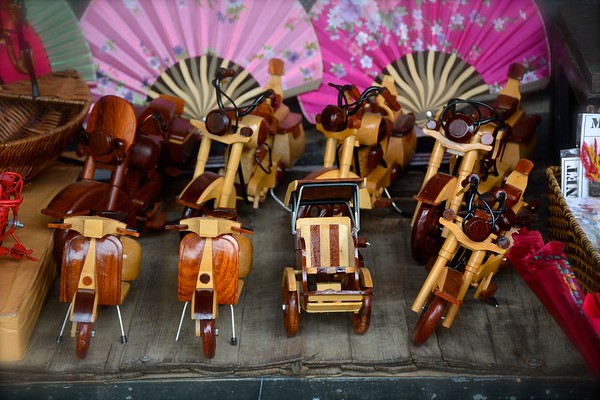 After our visit to Hoi An, we began our trek back to the port of Chan May. Although I would not recommend the travel agency that was provided, we would definitely recommend visiting “Marble Mountains” and the UNESCO World Heritage site of Hoi An.

For more photos of Hue/Danang – please visit our on line photo gallery:   Hue/Danang (Chan May).