All photos for this port can be viewed here:  St. Lucia Photo Gallery

As like our Celebrity Shore Excursion in St. Kitts, we were pleasantly surprised by the smaller bus (large mini van) that carried our group on this excursion.  Likely due to the narrow and winding roads of St. Lucia – large mini vans were used to corral the passengers off the berthed ships.  Far from the infamous crowded bus loads of 40+ people, we were a moderate sized group of ~14 and therefore easier for our guide, Nicole, to “herd the cats” at each of our stops.

One of our first stops was at a great look out over Port Zante, Castries where we had the great opportunity to snap photos of the Celebrity Summit and RCCL Freedom of the Seas that were berthed for the day. 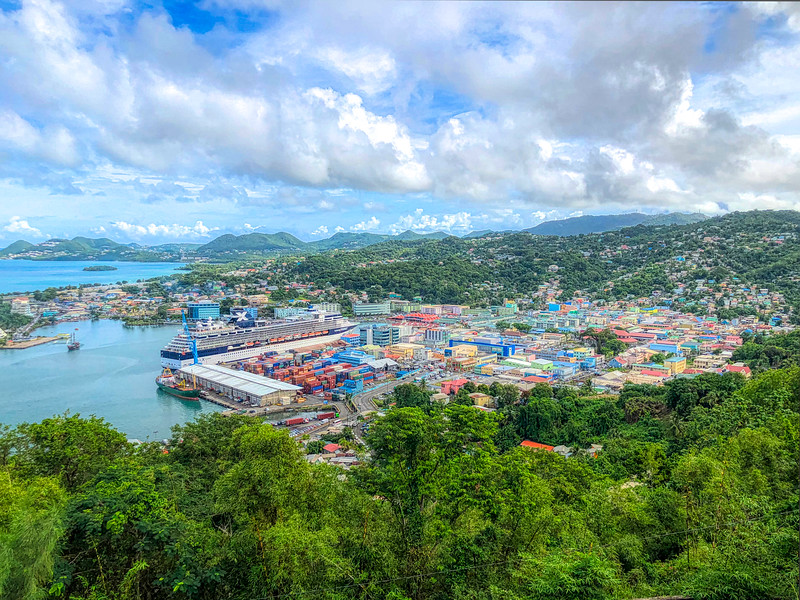 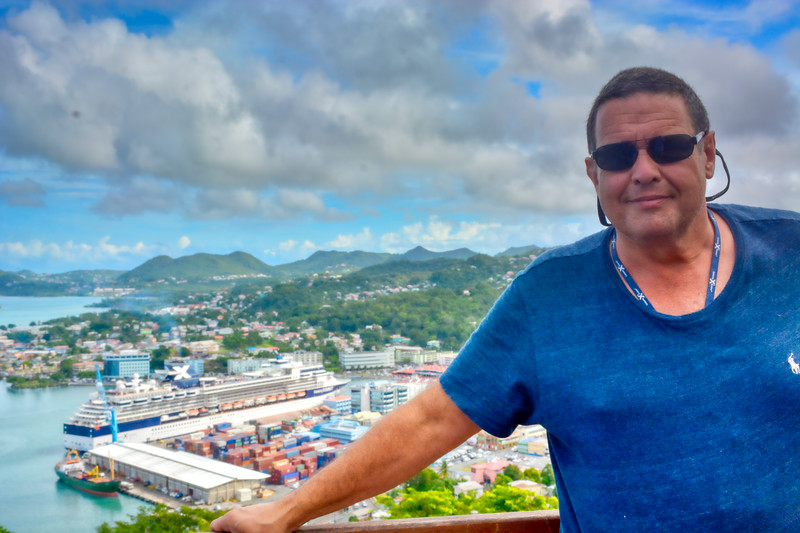 Our guide Nicole advised on the souvenir stands (with a few warnings regarding potential assertive sellers).  We took her words of wisdom of not to accept the “hummingbird palm origamis” lest we wanted to pay for them, as well as other helpful hints. 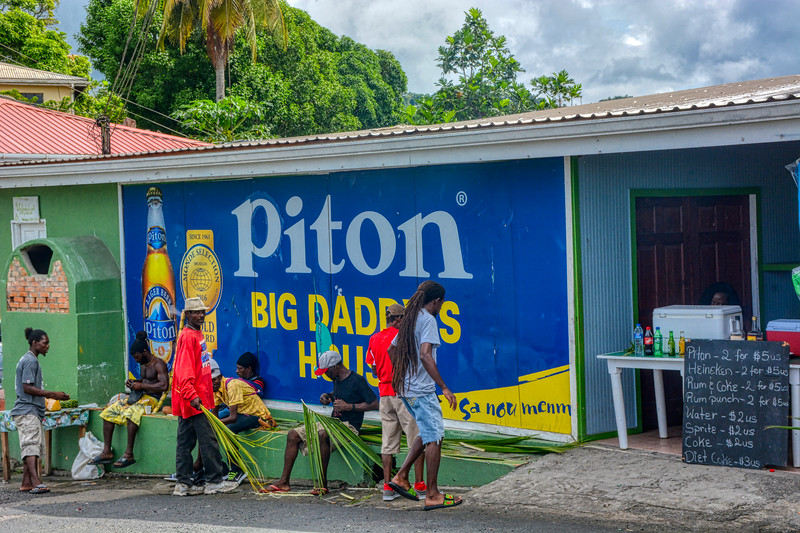 Other than those few tidbits of advice, we found the souvenir stalls, colourful & friendly! 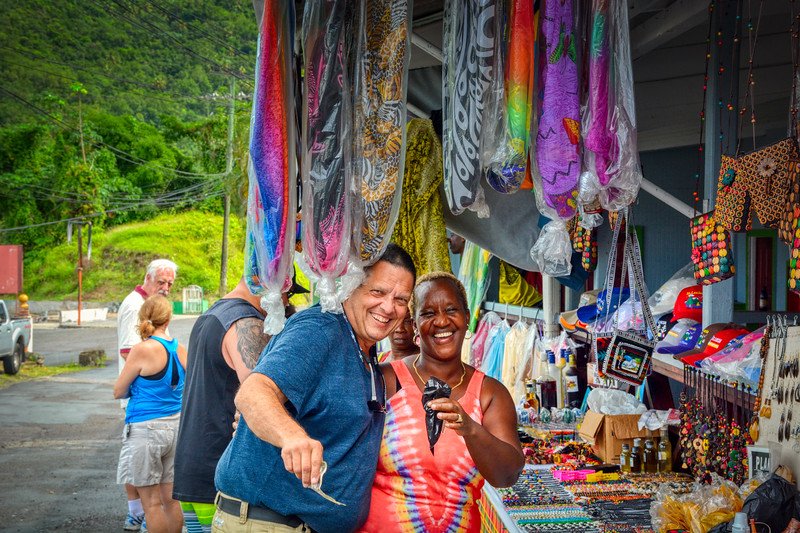 One of our favourite photo / souvenir stops was at Anse La Raye – where we had time to explore the fishing village, visit an old church, and seek out trinkets to bring home with us. 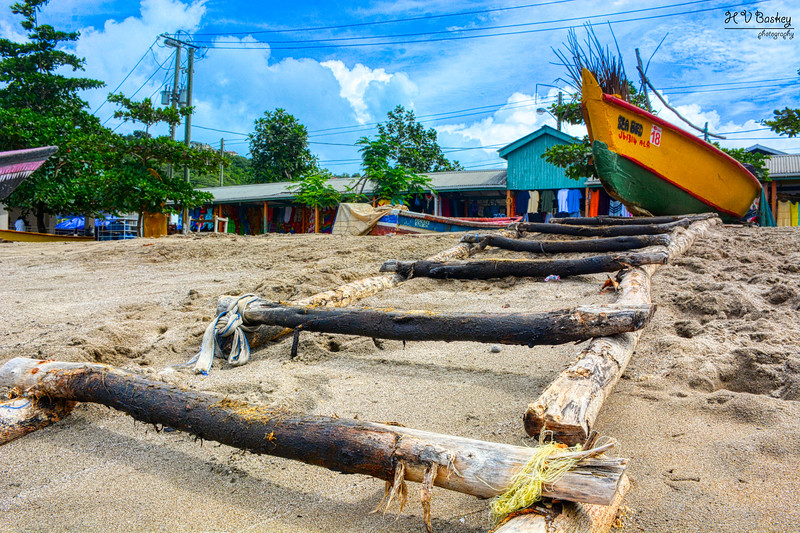 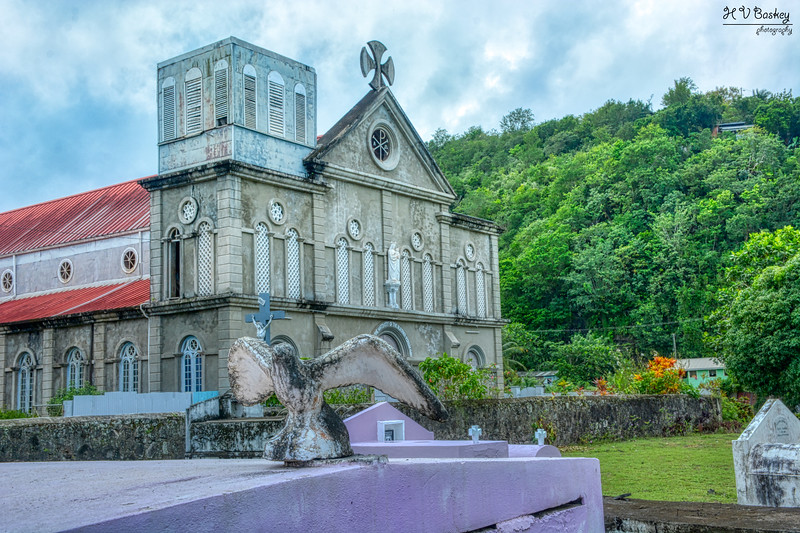 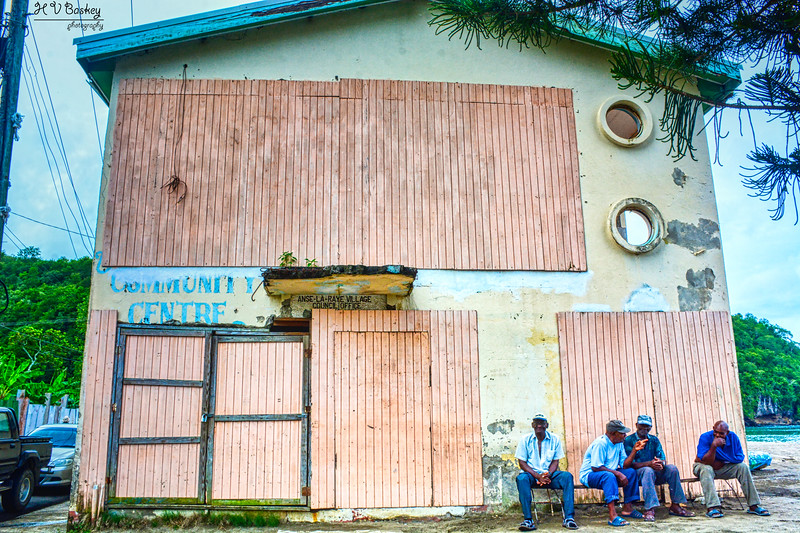 We also were treated to a great stop at “Maranatha Gardens” which offered lovely tranquil pathways amongst beautiful foliage and flowers.   The pathways were ordered with prayer signs along the way and colourful look out points.

In lieu of writing the history myself, here is a quote (with source link below) that not only aptly describes the gardens, but the owners’ vision and mission statement.

“The owner of Maranatha Prayer Gardens says prayerful communication with God inspired him to create these beautiful botanical gardens.  After eight years of work, in 2014, he considered the Gardens ready to be shared … The name Maranatha means “Lord come” or “Come Lord” and whether you consider yourself religious or not, you can’t help but feel at peace here – inspired, and your spirit renewed … The owners who also run the nearby Beacon Restaurant say, “It’s not just a flower garden but a prayer sanctuary that is open to all people. It is free because the greatest gift of all is free – God’s Love.” [Source Link] 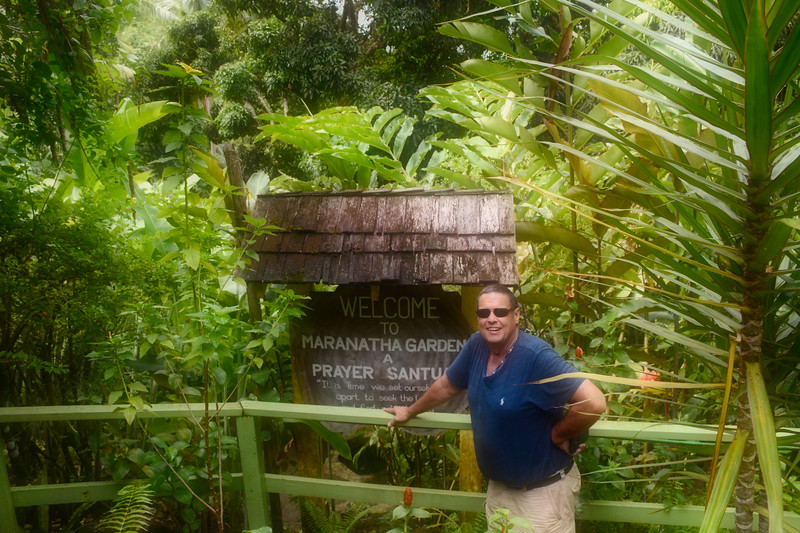 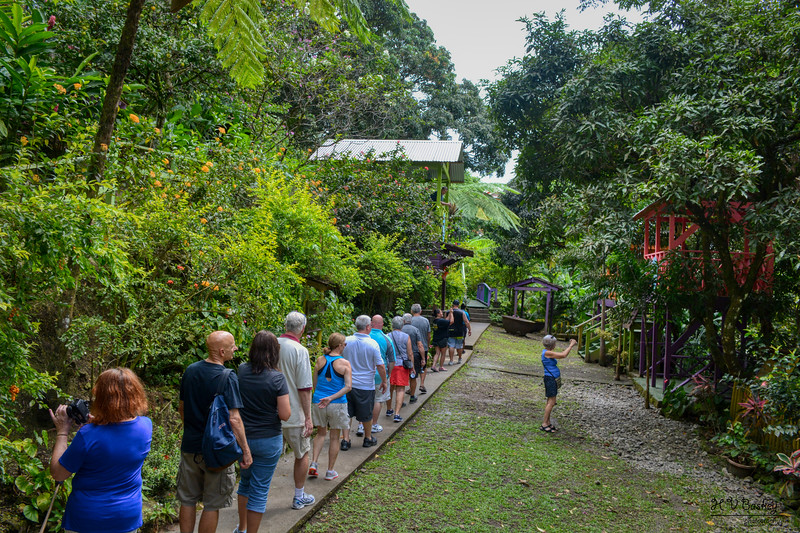 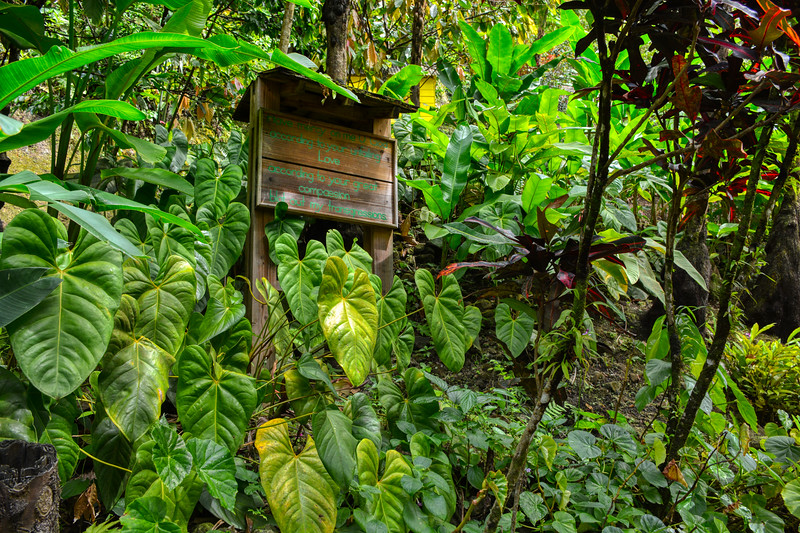 Following the botanical garden sanctuary, we were on our way to the town of Soufriere to visit their main attraction.  We had one more great photo opportunity (nearby the Beacon Restaurant) to take a snapshot of the Pitons with town of Soufriere below.   Sulfur emissions from the volcano could also be observed from this viewpoint. 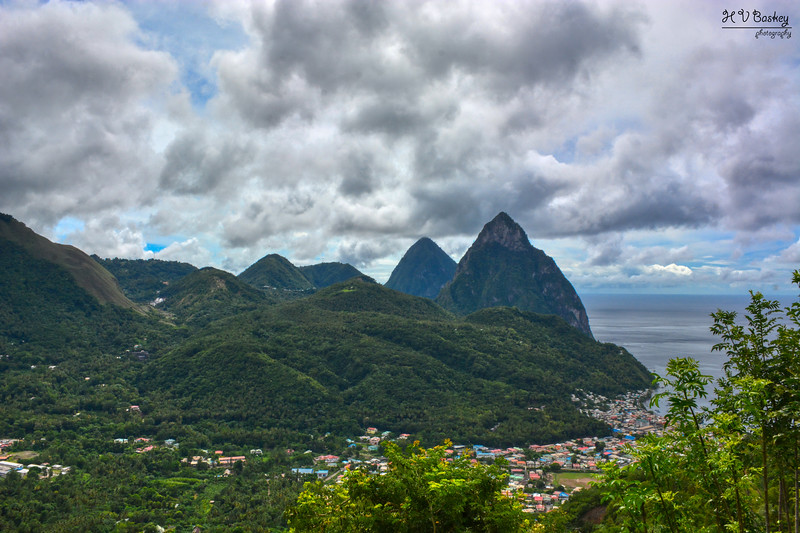 “The town of Soufriere, its regions and hills got their names from the French who dominated during the 1700s. Even today, customs, language, foods, place names and architecture still predominate today. The name ‘Soufriere’ is a French term used to describe any volcanic area, literally translated to mean, “sulphur in the air”. The same name was used by the French to call other volcanic regions in Saint Vincent, Dominica, Guadeloupe and Montserrat. [Source Link]” 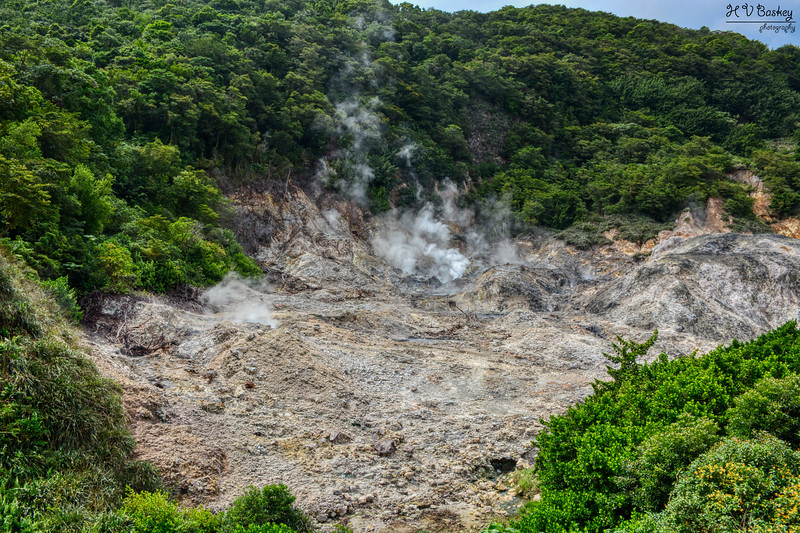 Our final stop for the day was at the Beacon Restaurant where we were offered a complimentary fruit drink.  There was also an optional lunch (for sale) that included Caribbean specialties.  We had a decent amount of time here to enjoy the complimentary drink and/or dine with the optional lunch offer, and/or simply take in the breathtaking views of the UNESCO World Heritage Site – the Pitons. 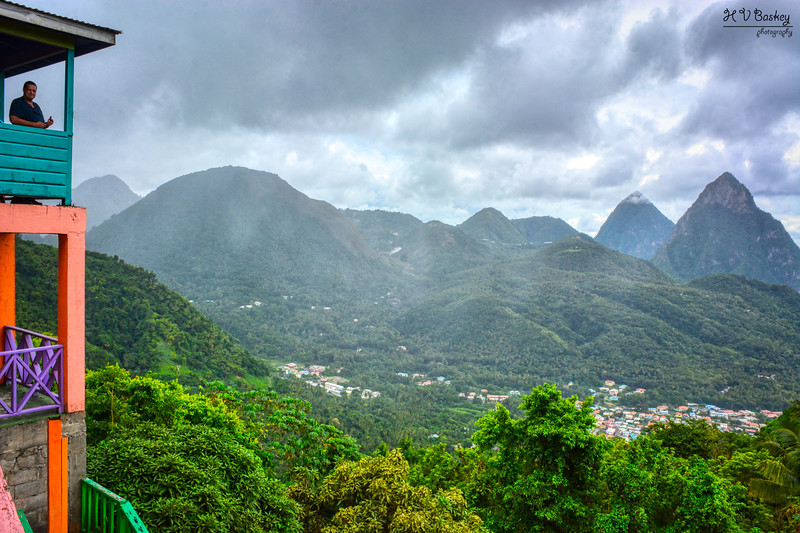 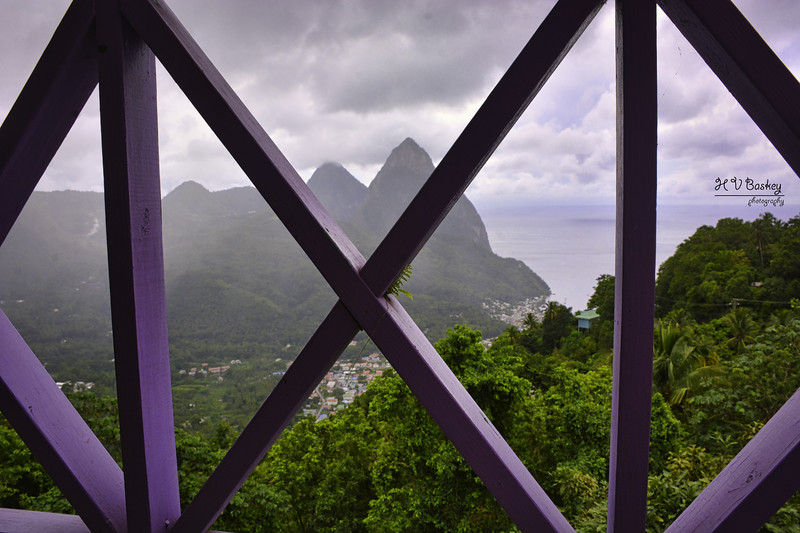 After our Celebrity Shore Excursion, we returned to the ship in very good time for a late afternoon snack!