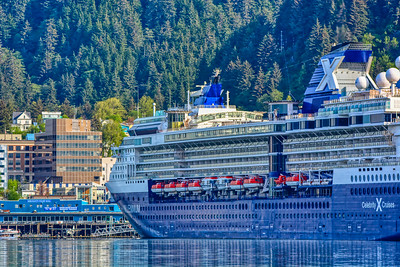 Juneau may have been the most difficult ports of call to make a decision on what to do, as there were numerous choices and all them were attractive to us.   At one point, we were determined to do the aerial tram and hike the forest trails above the port. As birders and nature enthusiasts, we were pretty settled on that.  But then, we decided a trip to Juneau without a visit to the famed Mendenhall Glacier would be a disappointment, so we switched our plans to take a local bus from the cruise port to the Park, hike the trails to Nugget Falls and take in the Glacier in all her glory.  This is one of the most popular excursions in Juneau, first-timers and repeat visitors, alike.
That plan was pretty much set in stone, until I saw a photo on Facebook from Destination Expert Extraordinaire, “Mickey Live”, who we had met on board the Celebrity Infinity during our South America Cruise of 2017.  I sent off a message to Mickey inquiring about the magnificent photo of a pair of black bear siblings. His reply not only informed me of where it was taken, but he kindly connected us to his wife Jelena of Skitara Travel, who arranged for us the same day trip to “Tracy Arm Fjord” via Adventure Bound Excursions.   It would end up being an extraordinary full day excursion and it  was well worth the change in plans with only weeks to go until the cruise!

I couldn’t help myself!  another early morning racing up to Deck 11 to join the wildlife spotting team.  I couldn’t stay too long today as we were arriving in Juneau by 7 am.   As we closed in to our port of call, more bald eagles were spotted and the quaint, but fair-sized city of Juneau was in our sights. 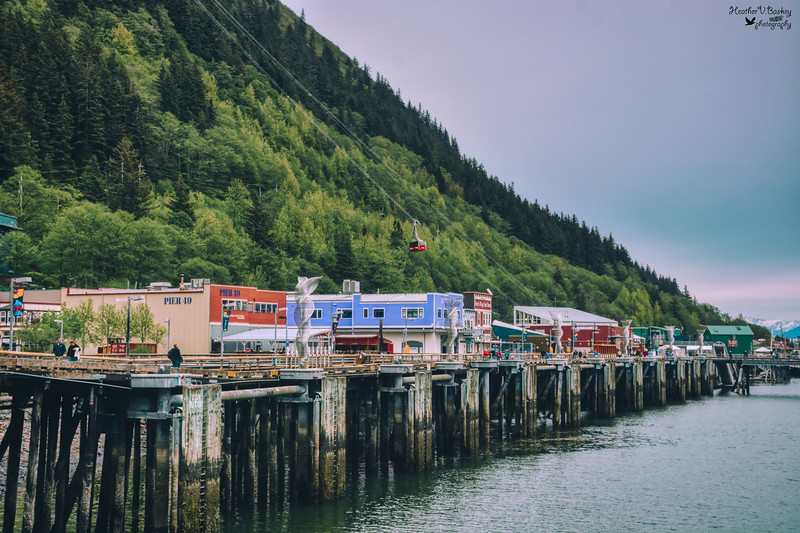 After a quick, light breakfast we quickly disembarked the Millennium to meet up with Jelena of Skitara travel. Jelena met us at the cruise ship dock where she generously took the time out of her morning to escort us from the port to the Adventure Bound Office in Juneau.  She stayed with us until our boarding passes were prepared and we had boarded the transport van to the “Captain Cook”, our vessel for the day.   Jelena was a gem and made the booking of this excursion seamless from ship to shore to excursion vessel!

Most of the passengers on the 10-hour excursion were locals and/or family members visiting locals.   One other person from our “cruise critic roll call” joined us on this trip and we had also met a gentleman from the ship who had booked independently.  We were surprised that there were not more people from the Millennium; but as luck had it ‘for us’, the excursion vessel had a few empty seats and we never felt over-crowded on board the 65’ Captain Cook. 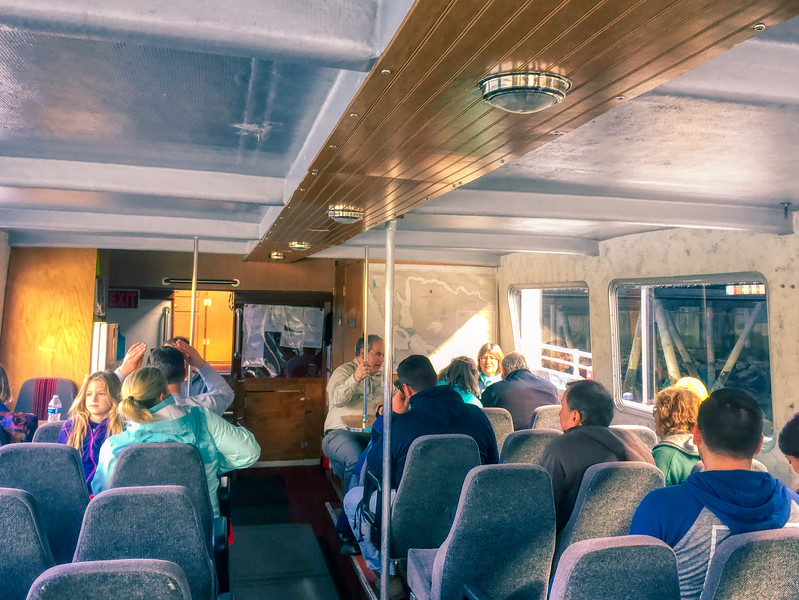 Jelena’s final advice was to spend as much time as possible outside on the viewing decks of the Captain Cook, for each and every turn within the Fjord would offer a new surprise. She was quite right!  I heeded her advice and didn’t miss a thing (with one exception of coming indoors for a quick 15-minute lunch break); staying outside to get the best views of the Fjord’s magnificent beauty.

“No words can convey anything like an adequate conception of its sublime grandeur – the noble simplicity and fineness of the sculpture of the walls; their magnificent proportions; their cascades, gardens, and forest adornments; the placid fiord between them; the great white and blue ice wall, and the snow-laden mountains beyond.  Still more impotent are words in telling the peculiar awe one experiences in entering these mansions of the icy North, notwithstanding it is only the natural effect of appreciable manifestations of the presence of God.” ~ John Muir, Travels in Alaska

Named after the Secretary of the Navy, Benjamin Franklin Tracy; Tracy Arm Fjord is a narrow waterway located ~ 40 miles south of Juneau, off Holkham Bay and adjacent to Stephens Passage within the Tongass National Forest.  Our excursion destination would be to the twin Sawyer Glaciers (North and South, respectively) which are located at the end of the Fjord.  Captain Steve advised us that glacier viewing would be determined by the presence (or more accurately, the absence) of ice.  He was pretty confident that the North Sawyer would be accessible (from previous runs in the early season); but the South Sawyer could still be locked up with ice.

From Eagles & Whales, to Sea Lions & Bears (Coastal Brown & Black), from Mountain Goats, to the star attraction – the incredible ICE; it will be an excursion that will invoke amazing memories for a lifetime.

En route to the Fjord, we marvelled at the spectacular mountain ranges that flanked Stephen’s Passage. 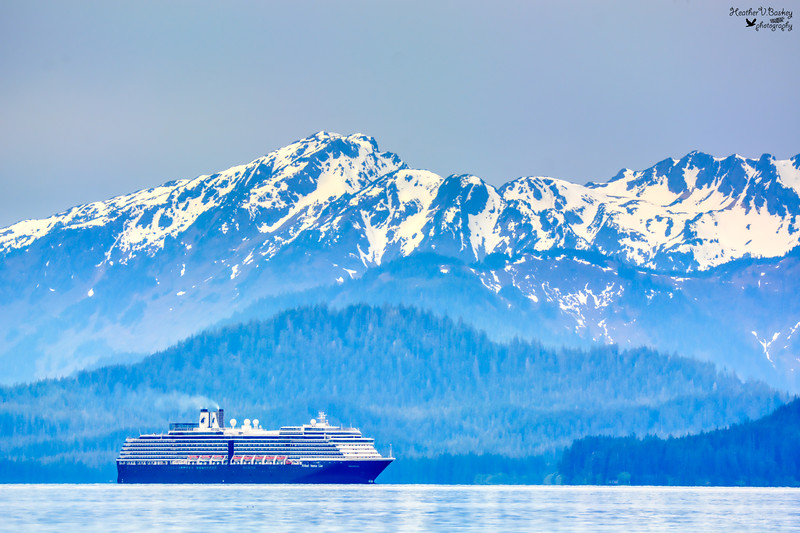 Beautiful waterfalls decorated the landscape breaking through the evergreens and carving their way across the granite walls. 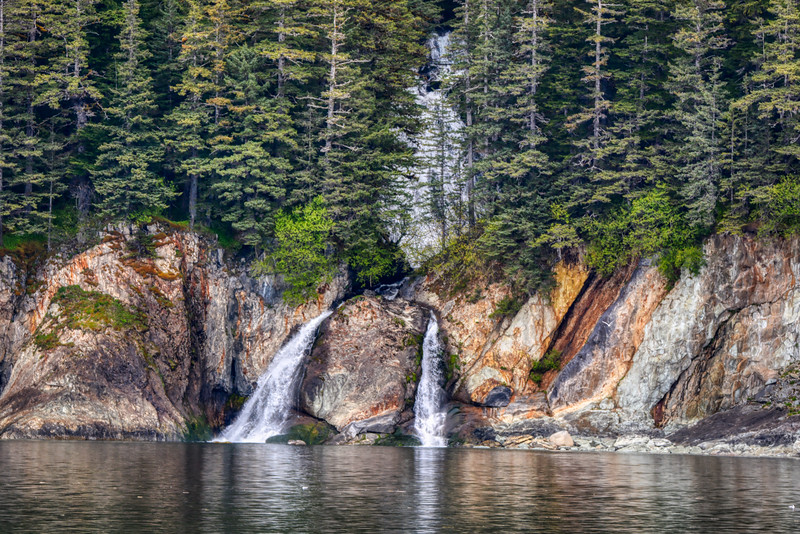 Humpback Whales, Stellar Sea Lions, Surf Scoters, Pacific Loons, Kittiwakes, and Bald Eagles were some of the iconic wildlife of the Pacific Northwest that were observed en route to and within Holkham Bay, prior to entering Tracy Arm Fjord. 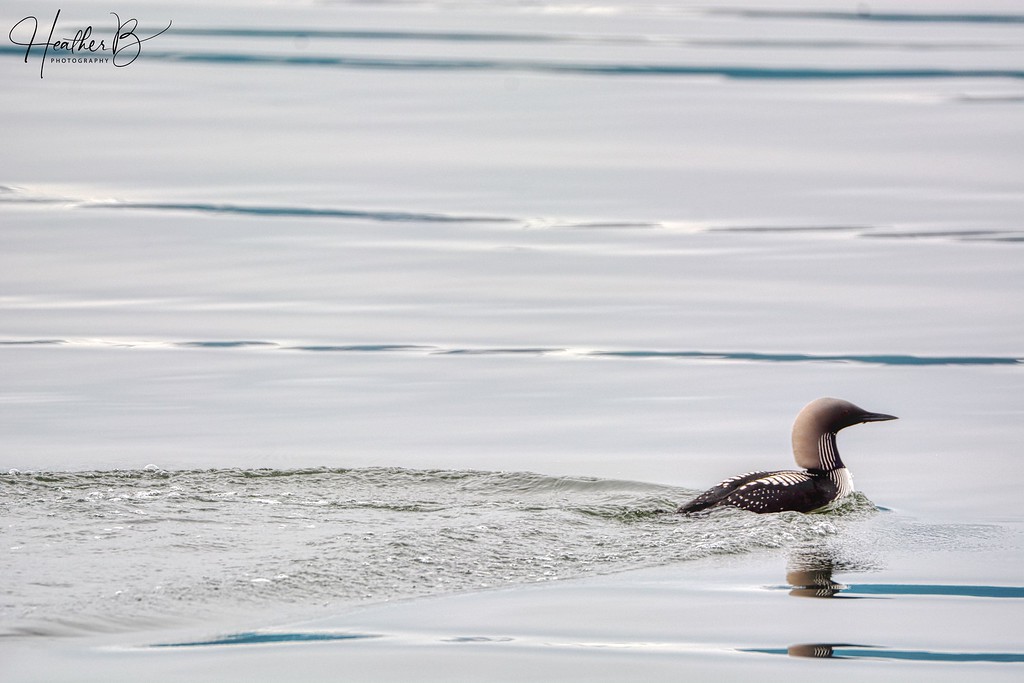 The closer we got to Holkham Bay, the more frequent floating chunks of ice began to appear.  On an overcast morning, these icebergs redefined the colour blue.
The excitement charged through the vessel’s observers’ veins, as the presence of ice became more frequent. The bergs began to grow in size, shape, and diversity; as we closed in from the calm waters of Holkham Bay to the inlet entrance of Tracy Arm Fjord.

After ~ 40 miles and much anticipation, we finally reached the waterway entrance of Tracy Arm.

Within Tracy Arm Fjord, there were surprises around each and every bend of the narrow inlet, which at times was no more than half a mile wide.  Cliffs soared to more than 3,000 feet on either side and waterfalls broke through, cascading down the striated granite walls to the green-coloured waterway. 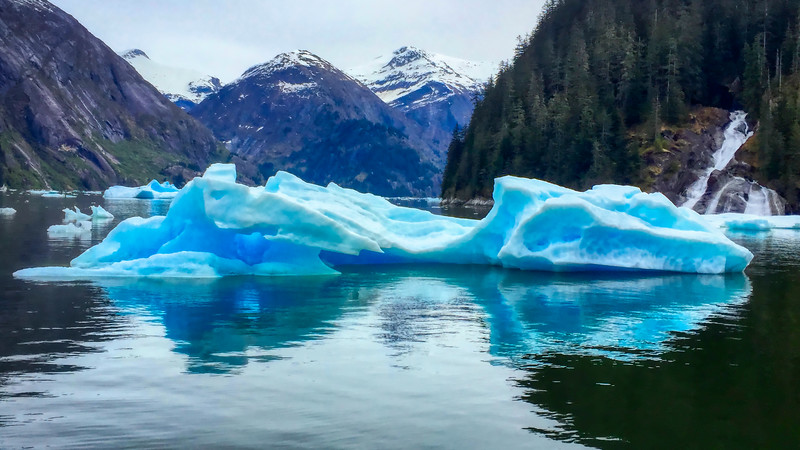 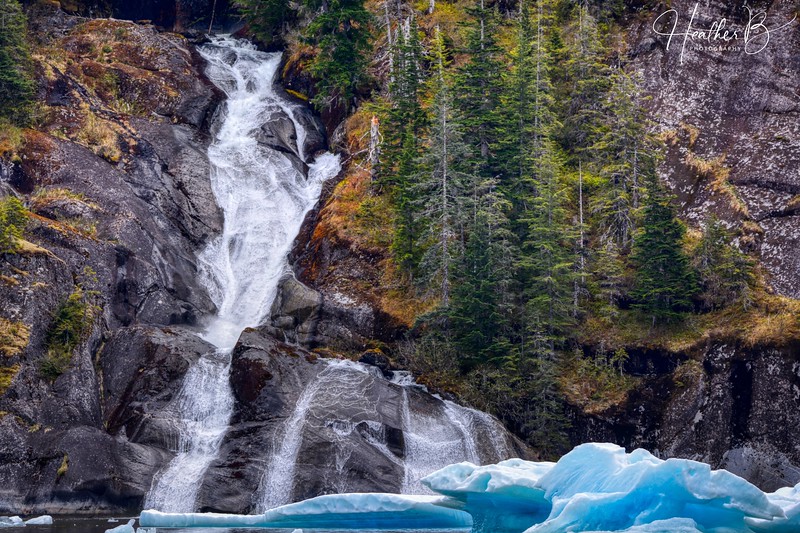 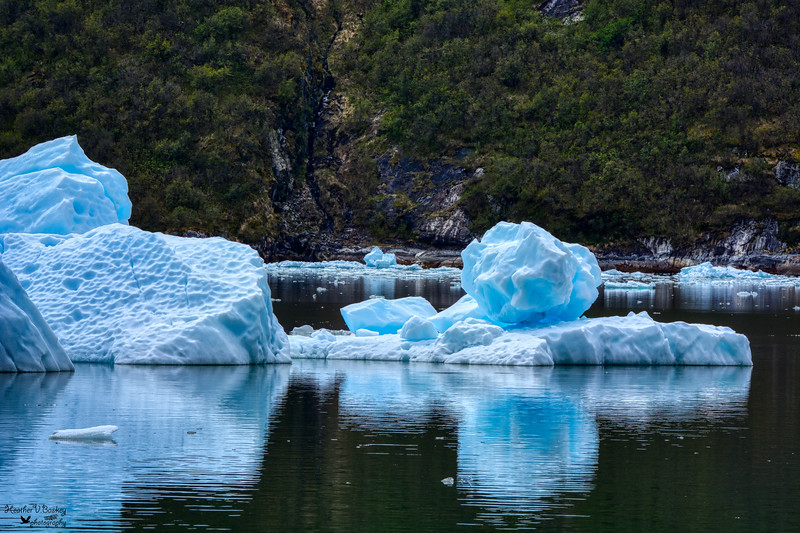 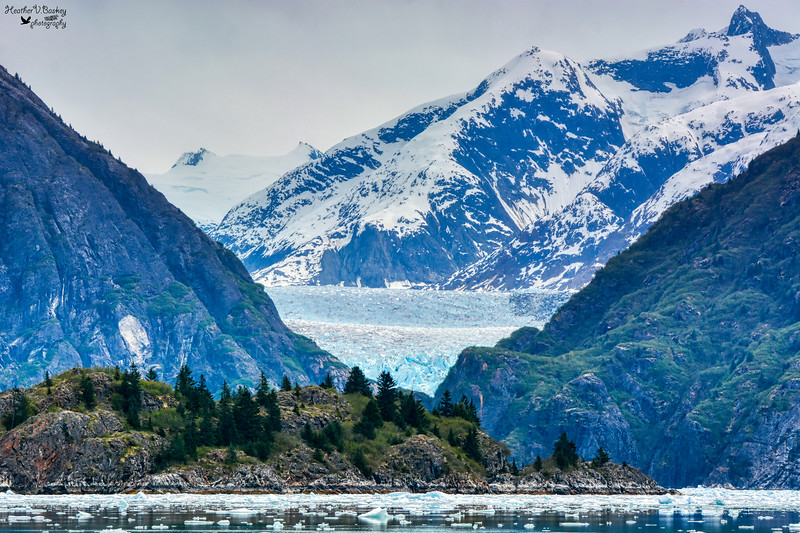 South Sawyer Glacier (above) was inaccessible due to pack ice that was still present.  However, we were able to get up close & personal with the smaller Northern Sawyer glacier (photos below): 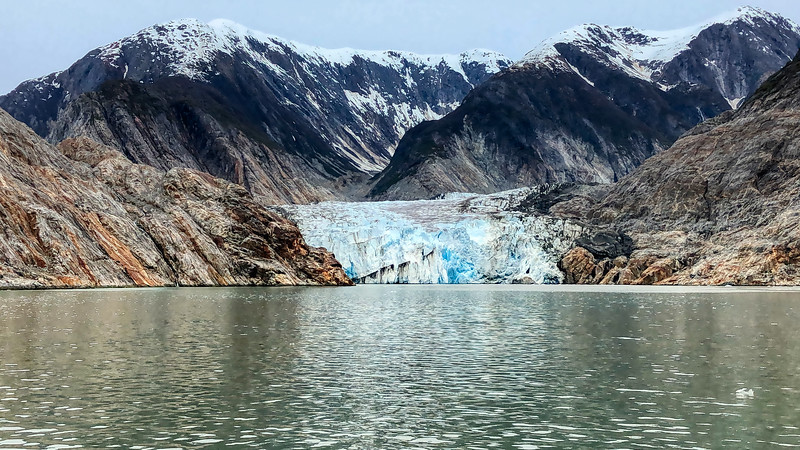 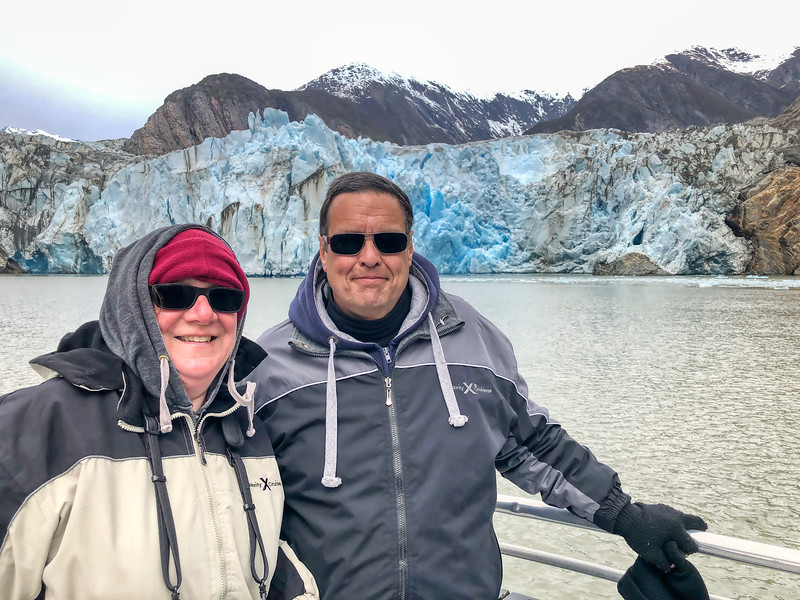 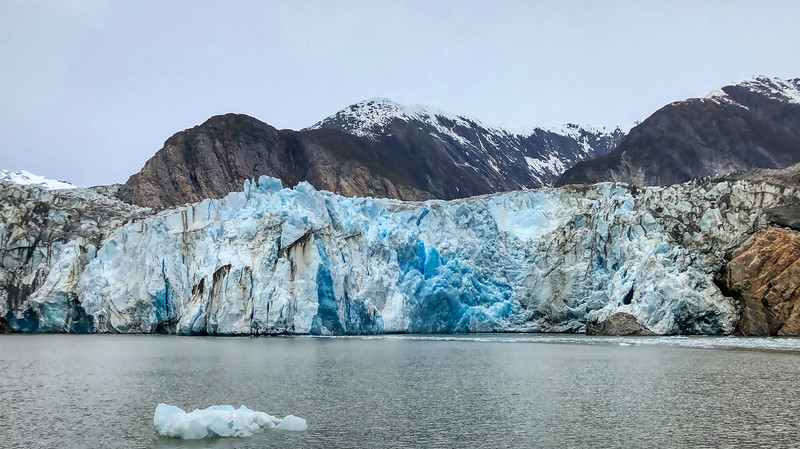 A coastal brown bear and a couple of black bears made a special appearance as they foraged along the shoreline. 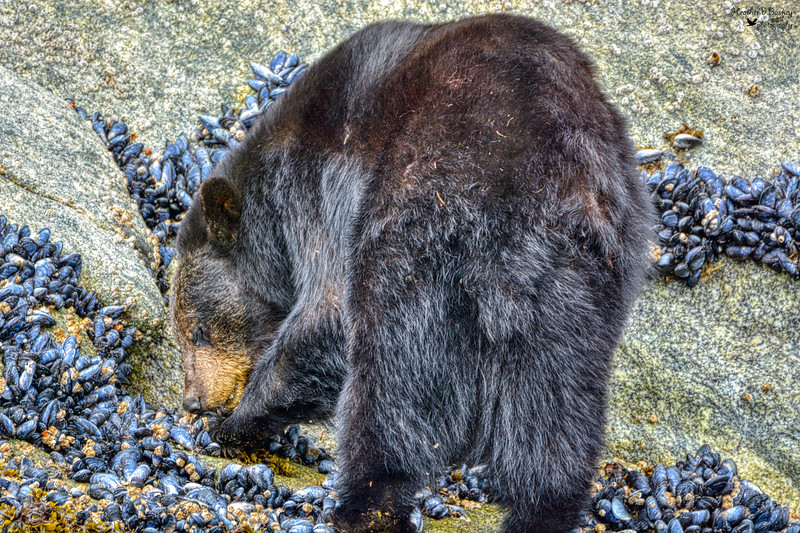 Due to nutrient rich upwellings, the inland sea is jade green;  a spectacular base for the granite walls reaching up to the sky.

Returning to Juneau, more whales were spotted within Stephen’s Passage cruising along the shore line.

After our adventure, we returned to the cruise port, where we still had plenty of time ashore to explore a bit of “downtown” Juneau.

We strolled the streets, purchased a few souvenirs along the way, before heading back to the ship to sail out after dinner. 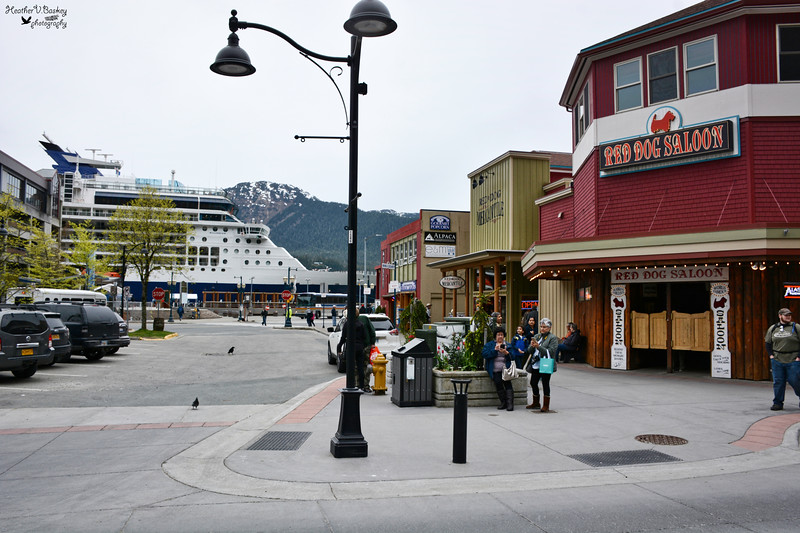