May 12, 2019
I awoke early today and peeked outside from our balcony to see where we were.  Sailing within a narrow passage, we were approaching Ketchikan and the rising sun was spectacular as it covered the inside passage in its golden rays. 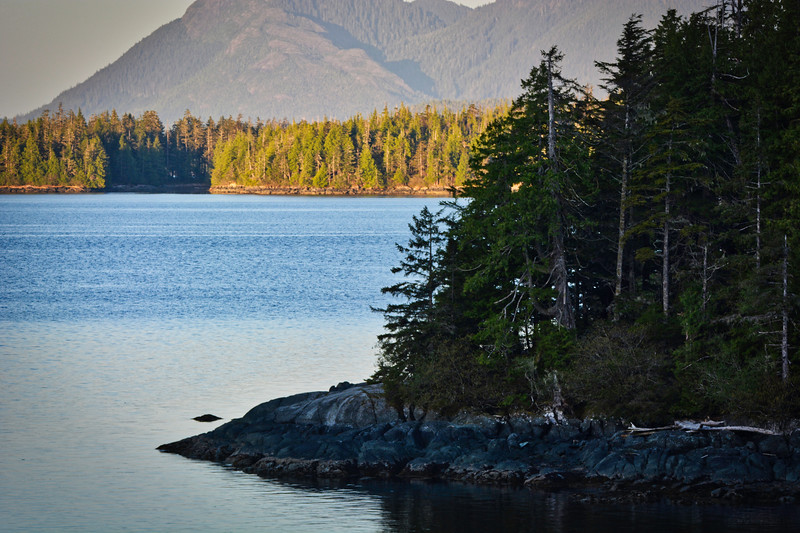 As I gazed upon the beauty before me, I heard my first eagle cry.  Goosebumps raised from my skin and my eyes scanned the forested inlet for visual confirmation.  And there she was, in all her beauty – the majestic Bald Eagle in all her glory – perched in the distance, calling for her mate – that answered. 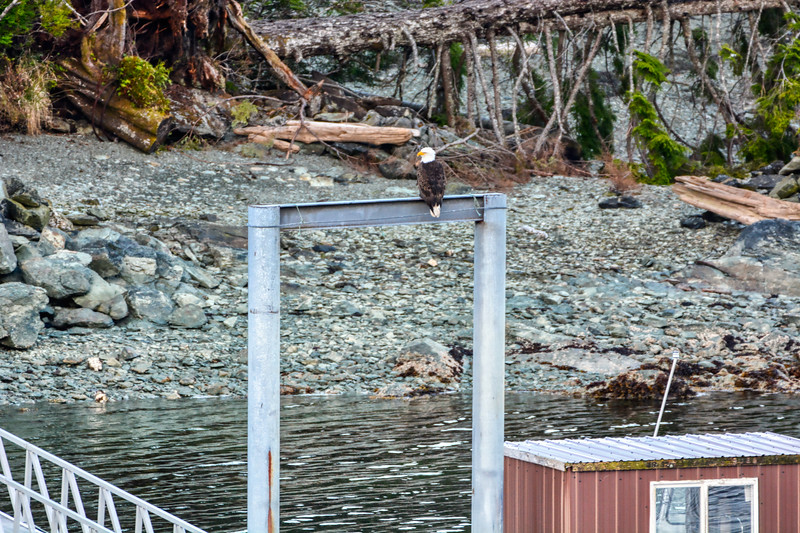 I could have experienced this marvel of nature all morning, but soon, we arrived in the port of Ketchikan , “Alaska’s First City” and “Salmon Capital of the World”.

We pre-arranged a shared private tour with our new friends, the Moses’ family (Karen, Samuel, and sister Robbin) with “Ketchikan Cab Tours” that had excellent ratings on Trip Advisor.  Our driver was “Dan”, one of Timothy’s  associates and he drove us around the environs of Ketchikan on a “three-hour” tour, which included a stop at Potlatch Totem Park.
Dan was more of a “driver” than a guide, showing us main tourist spots from a taxi cab perspective.
We stopped at a road side waterfall along the South Tongass Highway for a photo op.

As Dan drove us around the port town, we saw many Eagles, Harbour Seals (Herring Cove), and a nice find of Western Sandpipers at a location where bears can sometimes be found.

We also had a brief stop at Potlatch Totem Park, which was built on the old fishing grounds of Tlingit Natives.

In addition to viewing some of the parks totems, we visited a large Clan House (tribal house) which had several smaller tribal houses alongside it.

Each tribal house was elaborated decorated with wall carvings, both inside and out.

The main house had four differently carved posts and on one of the walls, there was an impressive Thunderbird carving.

After our three-hour tour, Anthony & I went to “Sweet Mermaids” cafe where we enjoyed a coffee and delicious scone. 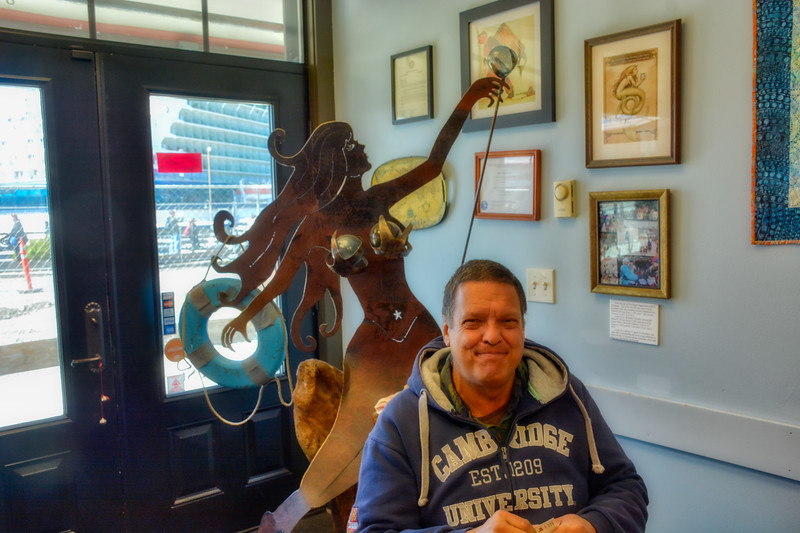 Refreshed, we then walked the small port town and found “Creek Street” that had a lovely wooden boardwalk that followed the creek lined with colourful buildings which sold fine Alaskan art and keepsakes. 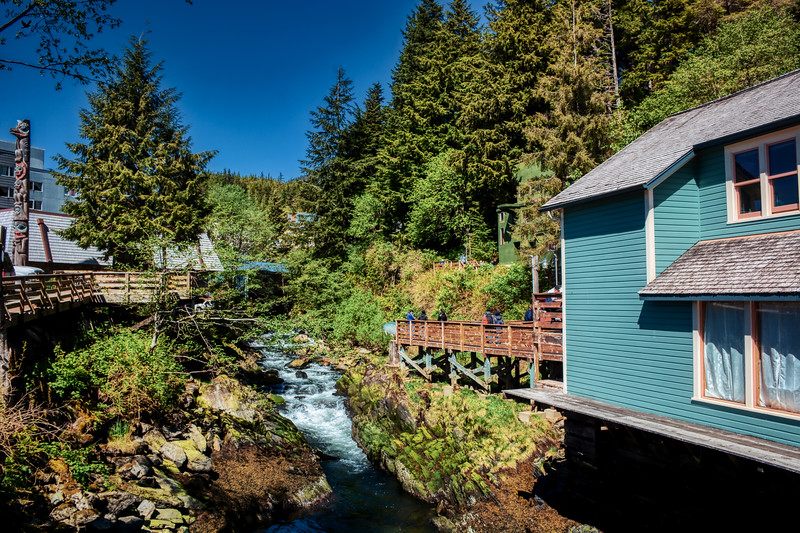 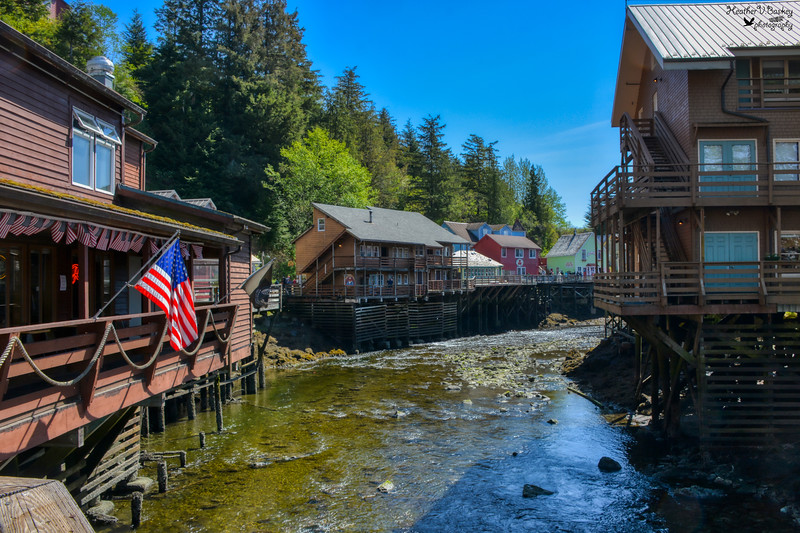 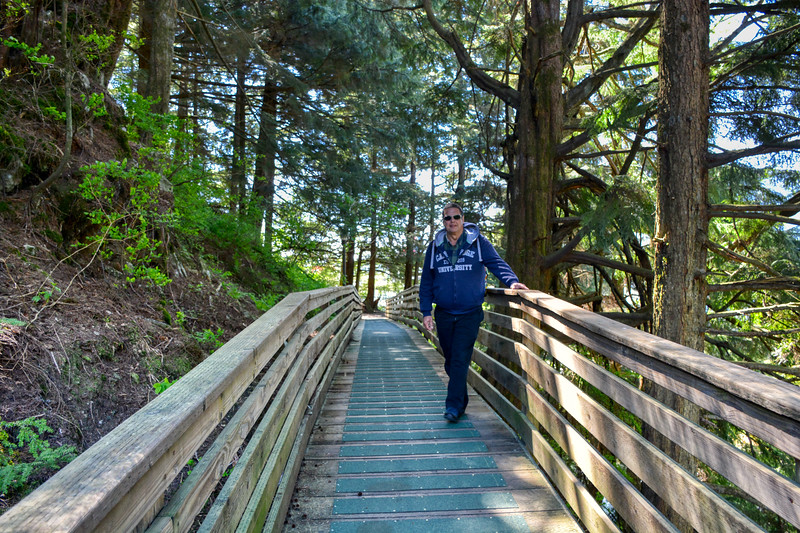 When we returned to the ship, we decided not to go to Luminae, but instead we ordered Pizza via our Butler, Ronald – and cracked open a bottle of red wine.

We sat on our balcony for quite a few hours, enjoying the beautiful view and on the lookout for humpback whales which we did spot within Stephen’s Passage between 7-8 PM as predicted by our well-experienced Alaskan destination Butler, Ronald.

We sat and watched the whales feed near the shoreline, as well we enjoyed watching the Celebrity Solstice as we sailed alongside her, before we parted ways at a fork in the road. 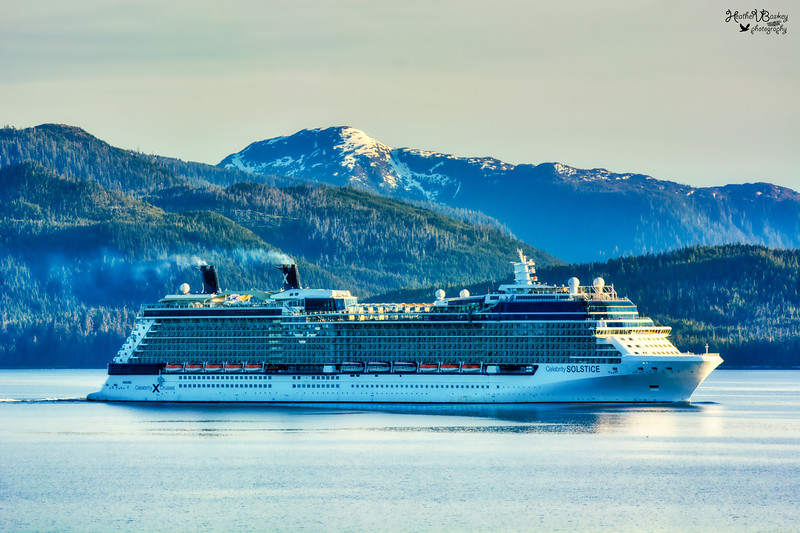